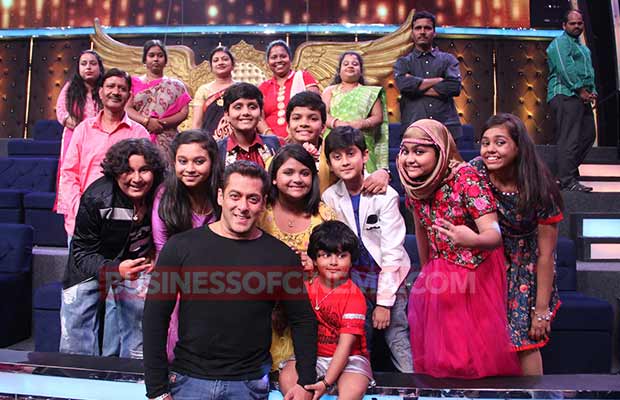 Bollywood actor Salman Khan has geared up for the promotions of his much-talked upcoming film, Tubelight. The superstar along with his brother Sohail Khan recently visited on the sets of Sa Re Ga Ma Pa L’il Champs. Well, Salman Khan’s love for little kids is known to all and nothing could make a better start to the promotions by spending time with Lil champs on the singing reality show.

The actor shot for an episode of Colors’ street talent show, India Banega Manch, and later he was seen on the sets of Zee TV’s Sa Re Ga Ma Pa Li’l Champs along with brother Sohail Khan, The duo had an amazing time together on the show. Going by the pictures, it seems Salman Khan has fulfilled his wish of singing with little kids. One can see in the photos, Salman sings as well as dances with the Lil champs. The upcoming episode of the reality show is surely going to be a worth watching.

Also, Salman Khan shared the stage with his close friend Himesh Reshammiya, who is one of the judges of Sa Re Ga Ma Pa Li’l Champs.

Talking about Tubelight, the trailer of the film showcases amazing bond between brothers Sohail Khan and Salman Khan. It’s a story about how Salman Khan goes to every extent to bring back his brother Sohail Khan, who went to a war. Since Tubelight has the Indo-China conflict as its backdrop, Hollywood’s legendary action director Glenn Boswell was roped in for the film. He has done films like Titanic, The Matrix, Fantastic Four: Rise of the Silver Surfer, The Hobbit series and X-Men Origins – The Wolverine. As he adds Tubelight to his kitty, we can’t wait to watch what he has done with this one!