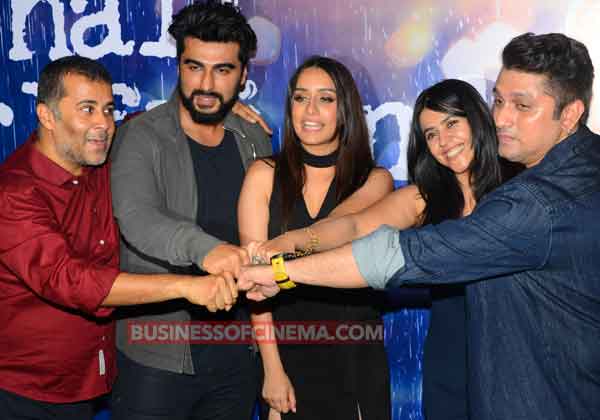 Half Girlfriend is an adaptation of Chetan Bhagat’s novel of the same name. The romance drama explores the ‘in-between’ status of today’s relationships. While the film’s music became quite popular, the fresh pairing of Arjun Kapoor and Shraddha Kapoor also aroused the curiosity of their fans ahead of the movie’s release. The makers threw a success bash last night to celebrate the film’s steady run at the box-office.

The cast and the crew got together for a success bash thrown by producer Ekta Kapoor.

Present at Half Girlfriend party were, of course, the two main leads, Arjun Kapoor and Shraddha Kapoor. The actress chose to wear a black dress – a classic- that she topped with a choker. She was looking beautiful. Arjun was looking handsome in a plain blue T-shirt that he paired with a dark grey jacket.

Other guests at the party were Chetan Bhagat (writer of Half Girlfriend) who came down with his wife. Director Mohit Suri was present with his wife Udita Goswami and their little one. Being close to Balaji, Mouni Roy, Anita Hassanandani, Divyanka Tripathi, Vivek Dahiya, Mona Singh, Karan Patel were also present. Rajkummar Rao, Tusshar Kapoor, Vikram Bhatt, Mahesh Bhatt were the other attendees from Bollywood.

Half Girlfriend has received mixed reviews and has collected around Rs 48.50 crore approx. in eight days. The film needs a strong second week at the Box Office for a long run.

Half Girlfriend has been directed by Mohit Suri, who is popular for romantic flicks like Humari Adhuri Kahaani, Ek Villain, Aashiqui 2 to name a few. This movie brought together Arjun and Shraddha on screen for the first time, and it was such a breath of fresh air. Well, all we hope for is that we get to see more collaboration between this perfect team. 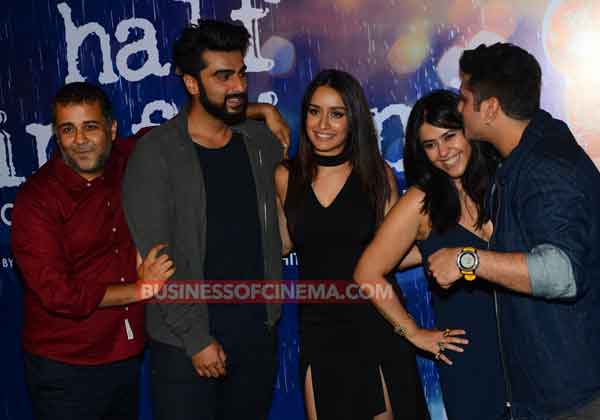