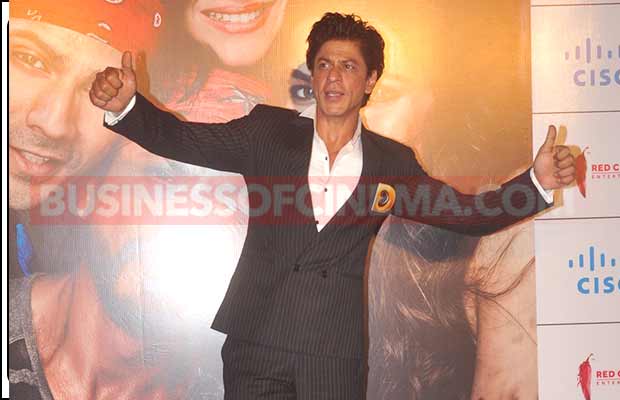 [tps_footer]Bollywood actor Shah Rukh Khan is known for his romantic and lover boy image and moreover anything women’s are unbelievably crazy for the actor. From his films ‘Kuch Kuch Hota Hai’ to ‘DDLJ’ and now ‘Dilwale’, SRK woos his female fan followers with his amazing lover boy image.

Yesterday, during the song launch of his upcoming film ‘Dilwale’ at Maratha Mandir, Shah Rukh Khan was asked about how he charms his female fan followers and that why women are so crazy for him. To which SRK at first smiled, blushed and then replied saying, “I have lots of free time, jaha koi ladki dikhti hai pohuch jata hu mein (jokes)…again and again I only tell only one thing that you should respect any girl or woman, in any way as a girlfriend, as a wife or as a sister, maybe I respect women a lot and that’s why they give me so much of love in return.”

Talking about ‘Dilwale’, after the amazing trailer, the makers of the film launched the most romantic song Gerua featuring Shah Rukh Khan and Kajol. The song is breathtaking, shot at amazing locations of Iceland. Well, this season is all set to create some heat waves with the one of the best on screen jodi showing off their talents after a long gap on the big screens. Directed by Rohit Shetty, the film also stars Varun Dhawan and Kriti Sanon in the lead roles. The film is all set to release on December 18 this year.[/tps_footer]