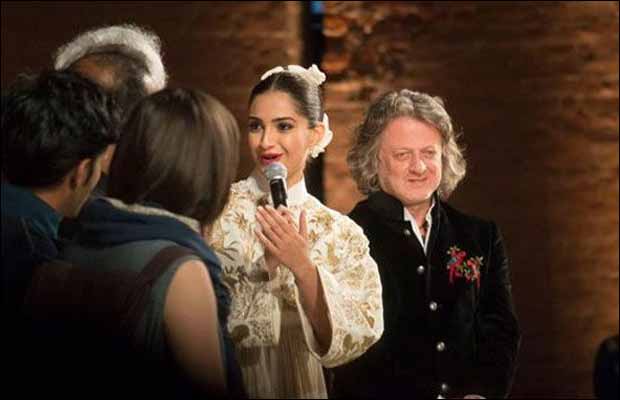 [tps_footer]When it comes to style and attitude there is no comparisons that can be made with Salman Khan. This Bollywood Hunk is in his Late 40’s but has the vitality, style, attitude and glamour quotient of a man in his 20’s girls go ga-ga over his style, attitude and charm. When Salman walks the ramp for any fashion Brand, Designer or any charitable function the event will sure be a hit, well this Dabaang Star does it again and this time with his on-screen love interest Sonam Kapoor in Ahemdabad for the promotion of Khadi Apparels.

Salman Khan looked like a dream in his all black sherwani which was paired elegantly with and embroidered multi color shawl. The fit of the clothes were so great that it looked as if they were made just and just for him. Sonam Kapoor is known in the industry for her great fashion sense and when a fashionista like her walks the ramp it is sure to create magic on stage. Sonam looked Ravishing in the all creamish white and gold gown that had an attached poncho over-jacket to up the style quotient.

After a long gap of a decade and more we will finally see our Prem make a comeback with Rajshri Productions in ‘Prem Ratan Dhan Payo’. Nothing much has changed; it is a usual Sooraj Barjatya family drama with huge lavish sets and beautifully decorated stars. We are anxious to see our Prem on screen. For the audience and the lovers of Prem it is a dream come true to see him play his almost copy-righted role of Prem, the eternal romantic lover. The release of the movie is during festival of lights that will tug at the heartstrings of audiences with the Indian-ness love and values it has in its core. The film will be more emotional than ‘Bajrangi Bhaijaan’ and will surely make you cry once again as said by Salman Khan himself.

We are anxious to see more about the movie because we are in love with what we have seen till now.

Also Watch: Salman Khan And Sonam Kapoor Show Their Funny Side On Comedy Nights With Kapil