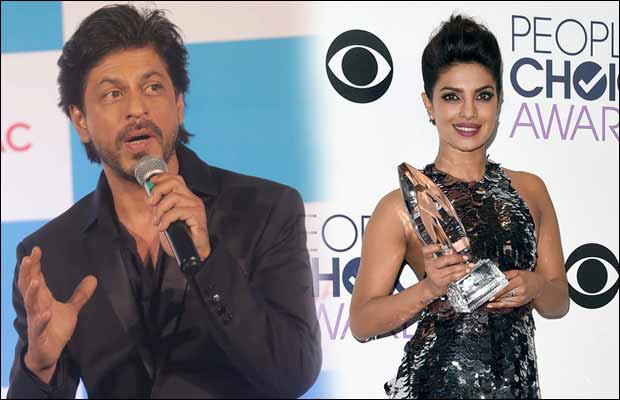 [tps_footer]Shah Rukh Khan who is known for his global fan following now has a competitor with Priyanka Chopra following his footsteps. Priyanka Chopra is undoubtedly creating a worldwide mark for herself and the nation with her successful international projects. The actress who is on the top position in the Bollywood industry has carved a huge fan base with her recent drama series Quantico.

Well, as we all know King Khan is the only superstar who is swarmed by fans on the global front. Seems like superstar Shah Rukh Khan cannot stop praising Priyanka Chopra for her amazing win at the People’s Choice Awards.

Priyanka Chopra won an award for the Favorite Actress in a new TV series for her drama series Quantico. The Kashibai of the tinsel town Priyanka who impressed the audience with her mind blowing performance in the series Quantico is receiving all the claps for bringing India on the global map yet again.

Recently, during the media launch of Kansai Nerolac’s coffee table book ‘Shades of Bengal’, Shah Rukh was asked to comment on Priyanka‘s win at the global platform. The highly talented actor commented, “What happens with these achievements is Indian cinema is introduced in places where it needs to be introduced. It opens gates for more actors and actresses to look at.”

The Dilwale star SRK seemed to be all in a cheerful mode when he spoke of Priyanka’s achievement. The actor hinted at the fact when one celebrity achieves success on the global platform it creates new avenues for others too.

When asked about whether he will ever venture into international cinema, SRK confessed, “I am very happy making the films that I do. I have made it clear many times earlier; I don’t think I will foray into it.”

On the work front, Shah Rukh Khan will soon be seen in the films ‘Fan’ and ‘Raees’ whereas; Priyanka Chopra will be seen in Prakash Jha’s ‘Jai Gangaajal’.[/tps_footer]