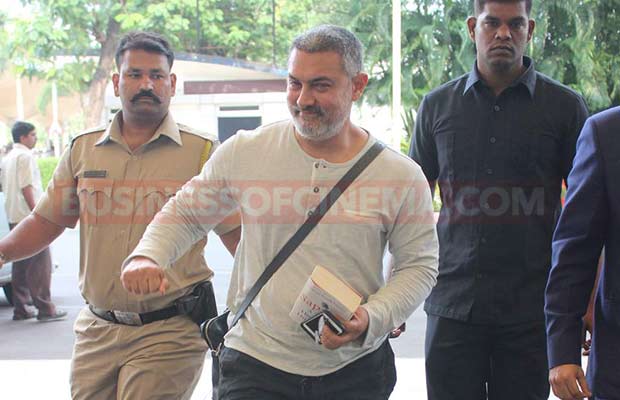 [tps_footer]Bollywood’s Mr. Perfectionist Aamir Khan has finally geared up for his next film ‘Dangal’, directed by Nitesh Tiwari. After giving a blockbuster hit ‘PK’, Aamir Khan is all set to face camera once again.

You would have never guessed the new look of Aamir Khan for his next most promising movie ‘Dangal‘. We caught a glimpse of Mr. Perfectionist while he was on his way leaving town for Ludhiana. The once lean, muscular and six abs packed Aamir today looked shockingly healthy. He was seen wearing a white full sleeved tee with full length cargo pants. It was awe worthy to see this superstar sport grey and white hair. We have always thought that time and age have no effect on this charming hunk. The brown ankle length boots sure upped his casual airport look.

After his last film ‘PK’, Aamir Khan is all set to woo his fans with his outstanding acting. The actor who was on a hard hitting training for the film is all set for the shooting of ‘Dangal’. Aamir Khan has went into big transformation for ‘Dangal’ as he has gained 90 kg weight for the film and has also learnt Haryanvi language and this is why he is called Mr. Perfectionist of Bollywood.