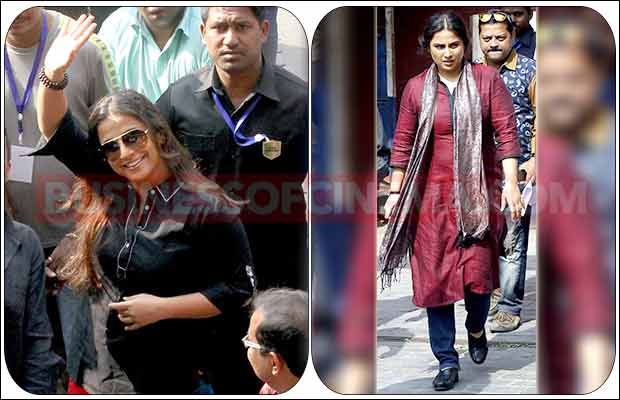 In red palazzo and loose black shirt, Vidya Balan was seen smiling for the shutterbugs with her producer, Sujoy Ghosh. She was spotted filming with actor Nawazuddin Siddiqui inside the brick-red edifice. On Friday, she will be joined by megastar Amitabh Bachchan and begin filming with him too. This would be Vidya Balan’s second movie with Nawazzudin and Sujoy Ghosh after the 2012 release ‘Kahaani’. Also, she has previously worked with Amitabh Bachchan in R.Balki’s ‘Paa’, where she played the role of his mother.

The movie ‘Te3n’ is the first movie for which the doors of the Victorian-era Writers’ Buildings have been opened for shooting. An architectural beauty, the sprawling red colonial landmark edifice is located in the heart of the city.

Not much has been revealed about the storyline of the movie. But, it is said that the movie is a remake of a hit Korean film montage. Directed by Ribhu Dasgupta, the film is slated to release next year.