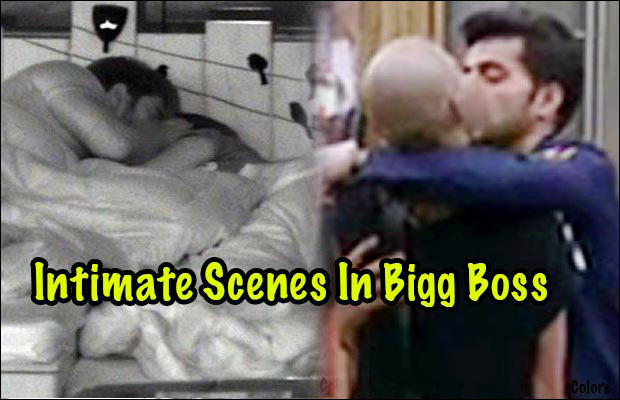 Bigg Boss show is not only known for its fights and controversies, but it also played a cupid for many couples in past 8 seasons. Lovebirds in the house grabbed all the eyeballs and also increased the TRP of the show with their intimate relationships. We bring the most popular couples of Bigg Boss show, who were known for their hot and intimate chemistry in the house. Click Next To See Photos

Rochelle Rao – Keith Sequeira (season 9) : Real couple Rochelle-Keith were spotted making out with each other. Keith was seen kissing Rochelle who was sleeping on the lower side of the same double bed.

Kishwer Merchant – Suyyash Rai (season 9): Too much in love couple who maintained distance in the ongoing Bigg Boss 9 house were caught making out at night. We got our hands on the pictures where Suyyash was seen lip-locking with Kishwer under the blanket. The duo was seen hugging and cuddling each other on the same bed.

Diandra Soares and Gautam Gulati (season 8) : Diandra and Gautam were the most strongest contestants of season 8. From spending romantic time over coffee in the house, to flirting with each other in every corner of the house, Gautam and Diandra surely made the show worth watching after they locked themselves in the bathroom many times.

Karishma Tanna & Upen Patel (season 8) : Continuing their love story even now, Karishma and Upen’s love story began every night after the lights went off in the house. From holding hands all day to their lip lock kiss, the duo grabbed all the eyeballs for their romance.

Kushal Tandon and Gauahar Khan (season 7): Kushal and Gauahar both fell in love with each other in Bigg Boss house and till date their love story is still remembered, but unfortunately it didn’t continue for too long after the end of the show. The duo always expressed their love in the house when the lights went off at night or whenever they were alone.

Armaan Kohli And Tanishaa Mukerji  (season 7): Armaan And Tanisha’s love in Bigg Boss house was most probably the boldest and excited one. They crossed all the lines on the show that even Salman Khan had to warn them that they are on the National television.

Sana Khan and Rajeev Paul (season 6): Despite of his ex-wife Delnaaz Irani being on the show, Rajeev Paul didn’t leave a single chance to get touchy with Sana Khan. The couch-kissing was the highlight of their romance.

Ashmit Patel and Veena Malik (season 4) : Their intimacy was the highlight of the whole season as they left no stone unturned to get close with each other. They were even caught giving massage and sharing same blanket when the lights of the house went off.

Rahul Mahajan and Payal Rohatgi (season 2): Their chemistry was the sensual one in the season 2. From getting touchy to giving massage to each other, Rahul and Payal raised many eyebrows.