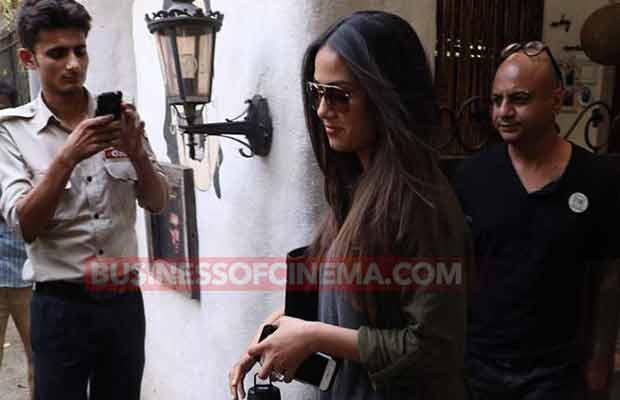 Shahid Kapoor’s Wife Mira Rajput gets a makeover in a hair salon!

The Bollywood actor Shahid Kapoor and his wife Mira Rajput give us marriage goals. On several occasions, we have seen the lovey-dovey couple having a great time together. Whether it is their appearance on KJO’s Koffee With Karan or a small lunch date in town, the two of them look exceptionally cute together.

The pretty lady has been spotted again in town, but this time not with her darling husband. Her little munchkin Misha was also not with her. She was spotted outside the famous hairstylist Aalim Hakim’s hair salon. And she looks amazing after her hair makeover.

She was seen adorning an algae green shrug over a grey top, combined with black bottoms. She had left her hair open, falling upon her shoulders which was making her look pretty.

Recently, her daughter Misha’s video went viral on the net when her hubby, Shahid shared the cute little kid’s dance moves on his social media handle.  We could see in the video, how Misha was bouncing with the beats of the music, trying to match daddy’s steps.

Shahid and Mira together have even won the award for The Most Stylish Couple. They were called upon the stage to collect their awards. And this was when the Udta Panjab actor went on his knees and proposed his wife in the most adorable way. Wasn’t that cute?