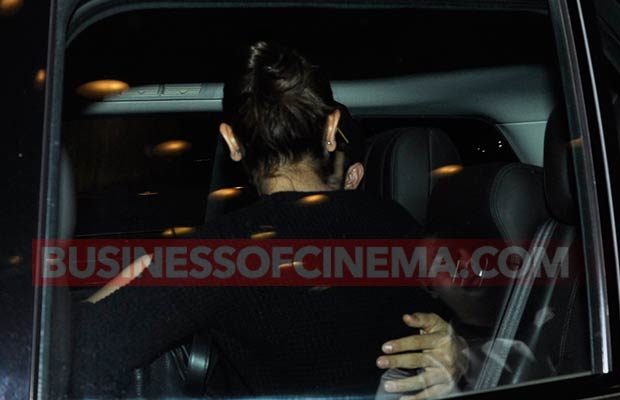 [tps_footer]Each and everyone is very much excited and happy to see adorable couple Virat Kohli and Anushka Sharma back together again. Since the two were spotted on a dinner date last month, it was pretty clear that Virat and Anushka have sorted their differences and are back together. Well, Virat, who was busy with IPL, recently landed back to Mumbai to spend some quality time with his girlfriend Anushka Sharma.

Now here’s another picture of the couple that will make you go aww! Last night, Virat and Anushka were spotted at Mumbai airport while the actress was heading to Budapest for the shooting of her next film. The handsome hunk Virat came to bid adieu to his lady love, as she was moving to another country for the shoot. Virat was also spotted kissing and hugging Anushka before dropping her at the airport.

Soon after she got off from the car, Anushka was in all smiles and posed for the shutterbugs. The actress was seen all pretty in her off duty sporty look. Well, that happiness of getting back to her love was undoubtedly reflecting on her face. No trolls, no gossips, and no rumours could stop them from getting back together and surely they make an adorable pair.

Virat and Anushka always maintained silence over their break up rumours but this recent piece of news will make you feel joyous. They are giving us major relationship goals!

Share your thoughts about the adorable couple in the comments section below![/tps_footer]