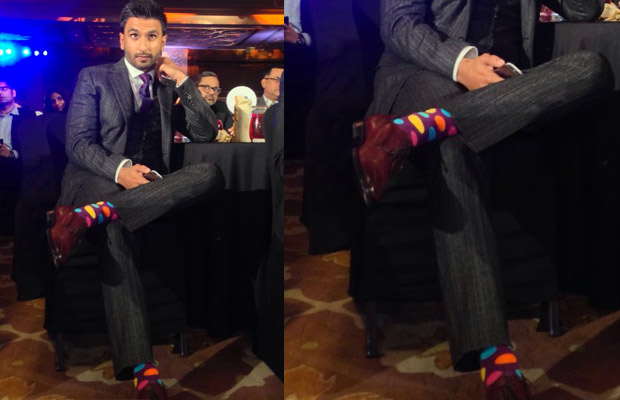 [tps_footer]Like always, Bollywood actor Ranveer Singh who stays in headlines for his quirky outfits was seen wearing another strange one yesterday at an awards ceremony. The craziest and energetic actor who is known as shutterbugs friendly, was clicked in a dapper look with a touch of quirkiness.

Called for his loud behaviour and dressing style, Ranveer Singh has his own unique style and following the same, he added quirkiness in his classy look at the awards event. Yes, the ‘Bajirao Mastani’ actor was spotted wearing multicolored polka dotted socks with a suave suit.

Well, only he knows how to grab all the attention and always stay in talks. What’s your take on his this look? Classy or quirky?

As we all know, its not even a single day where people won’t talk about Ranveer’s quirky look and behaviour. Agree it or no, his experiential looks, funky printed shirts, shorts and other quirky outfits are something that is not every ones cup of tea. Moreover anything, the actor carries it being in his comfort zone, which looks invariably different.

Ranveer Singh keeps entertaining people always and with this he also received ‘Entertainment Of the Year‘ award while his alleged lady love Deepika Padukone who was also present at the awards event received ‘Actor of the Year’.

Also, take a look at the video of Ranveer Singh dancing on the stage with Dr. Farooq Abdullah on his famous song “Malhari” from Bajirao Mastani

Dr. Farooq Abdullah and @RanveerOfficial shake a leg on stage at the #NDTVIndian Of The Year 2015 https://t.co/PpGBWnrIRh

On the other hand, Bollywood’s megastar Amitabh Bachchan was honored by ‘Lifetime Achievement Award’. Big B also took to his twitter handle to express his win on the same.

He tweeted the pictures of him receiving the award with his wife Jaya Bachchan, “T 2133 – NDTV Indian Of The Year Award , Lifetime Achievement Award .. so blessed and honoured ! Thank you !! 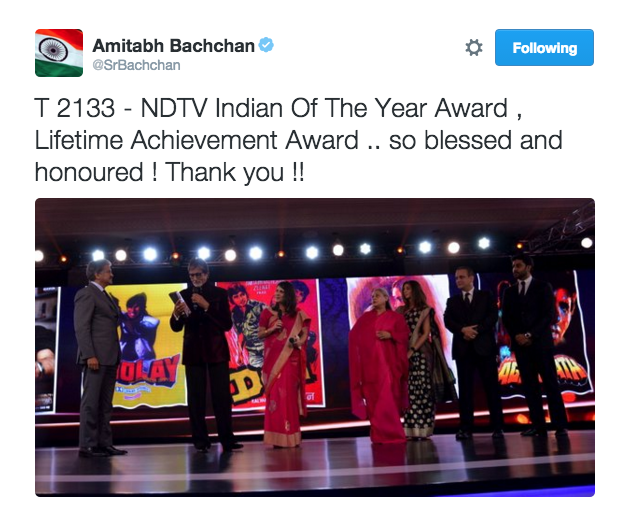 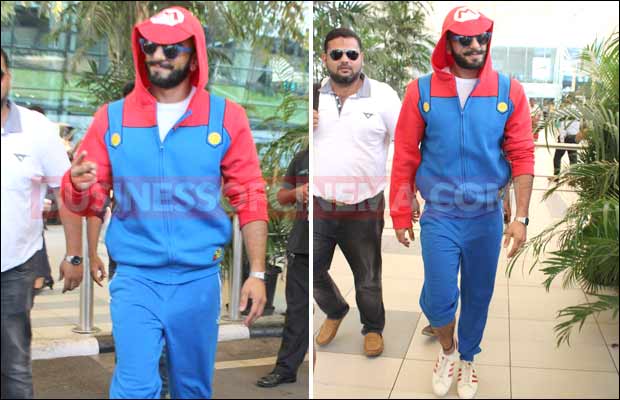