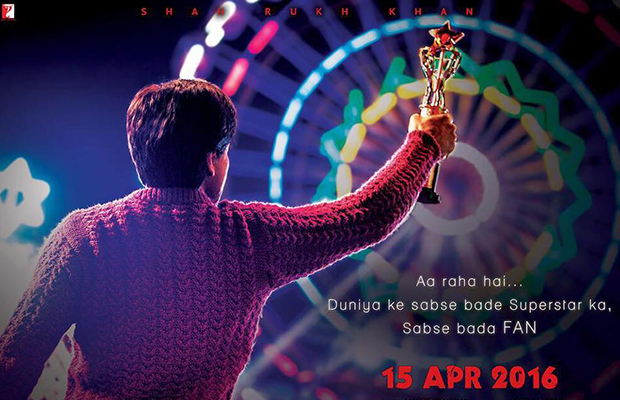 [tps_footer]Shah Rukh Khan is always ready to give something new to his audience. Yet again, the superstar has decided to treat his fans with something unique. King Khan is the busiest star of the industry; the superstar is currently entangled in the shooting of the films ‘Raees’ and ‘Fan’. After the massive film ‘Dilwale’, the actor has already started shooting for ‘Raees’. Well, apart from playing a bootlegger, the actor is also prepping up for playing a double role in ‘Fan’.

According to reports, the team of the film ‘Fan’ has researched Shah Rukh Khan’s earlier films to give a more realistic touch to the film. The creative team is all set to recreate the attires from SRK’s previous films. Speculations suggest that SRK’s character in the film ‘Fan’ named Gaurav (who plays the die-hard fan) will be seen wearing the attires from King Khan’s earlier films.

The film ‘Fan’ does not only lay emphasis on the superstar, but will also showcase the life of a fan. The film’s first glimpse has already released and is making all the positive rounds. Shah Rukh Khan in the film will be seen playing the superstar and also will be seen portraying the character of the biggest fan.

The idea to match SRK’s attires from earlier films is very unique as it will give a new feel to the movie and will also take back the audience to the earlier times. Gaurav who plays a lookalike to the superstar Aryan Khanna will appear more delightful with the identical attire.

The team of the film is working hard to match the concepts. The movie is speculated to have small hints of SRK’s earlier films and also hints from his famous characters of Rahul and Raj.

Meanwhile, the plot of the film ‘Fan’ is revealed. It was speculated that the film will portray a story of the fan and his idol, but there is a twist. According to reports, ‘Fan’ is not only a story of the fan, but it will turn out to be a rivalry between the superstar and his biggest fan. The look of SRK’s character Gaurav has already been unveiled, but the character of the superstar is still kept in wraps. It is also said that the film has an action sequence in the end of the story which will play a very important role in the whole scenario.

‘Fan’ is directed by Maneesh Sharma and the plot has already generated loads of curiosity. The film will hit the screens on April 15th, 2016.[/tps_footer]