Bollywood actor Salman Khan‘s ever-growing friendship with Shah Rukh Khan has always been a talk of the town. In fact, all the three Khans of B-town have been friends for decades. The three superstars SRK, Aamir Khan and Salman Khan were much loved for their camaraderie. While we often see Salman and SRK meeting each other, it’s not very often you see Aamir Khan socializing with his old friends. Finally, after long we see SRK and Aamir partying together.

Putting all the rumours to rest of having a tiff with each other, Shah Rukh Khan posted a cool selfie with none other than Aamir Khan on Twitter and is breaking the Internet. SRK tweeted the selfie picture with a caption, “Known each other for 25 years and this is the first picture we have taken together of ourselves. Was a fun night. 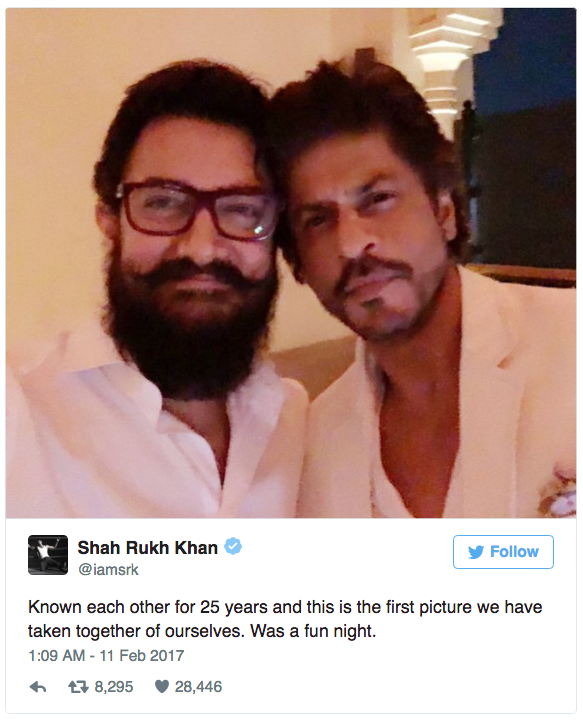 So, it took them nearly 25 long years to get this cool and happening selfie. The picture is reportedly taken at the private birthday bash of Ajay Bijli. After this, we surely can’t wait for them to come together on the silver screen.

On the work front, Aamir Khan is currently celebrating the success of his recently released film Dangal while SRK is also in joyous mood after the success of Raees. Aamir is gearing up for his next titled ‘Thugs Of Hindostan‘, while Shah Rukh will be seen with his ‘Rab Ne Bana Di Jodi‘ co-star Anushka Sharma for Imtiaz Ali‘s untitled project.