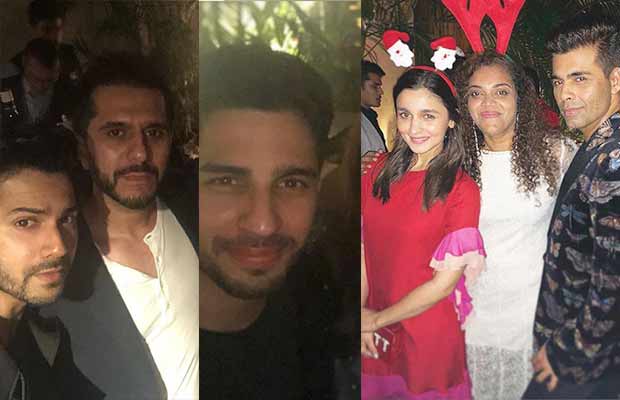 Karan Johar along with Alia Bhatt, Varun Dhawan and others at a Christmas bash.

Trust Bollywood to go best with any kind of celebrations. After attending grand Diwali parties, it’s time for the celebrities to let their hair down at fancy Christmas dos. Karan Johar celebrated pre-Christmas with his close friends including Sidharth Malhotra, Alia Bhatt and Varun Dhawan.

Alia Bhatt looked pretty in a red dress and flaunted her ‘Bhatt’ customized box clutch. Boys Sidharth and Varun Dhawan looked dapper as they posed together for a selfie.

Ho ho ho.. The Christmas tree is up and Santa has left us a present already, and Simba our pet cat wants to gobble up the baubles?????#christmascheer #christmastree #tradition

Also, Kareena Kapoor Khan-Saif Ali Khan’s son Taimur will celebrate his first Christmas. Saif Ali Khan in an interview revealed that they have put up a nice X’mas tree with some pretty ornaments and other decorations at home.

In the other news, reportedly Taimur will be celebrating his first birthday on December 20 in London. However, the family has kept plans under wraps.

Meanwhile, Karan Johar recently announced the biggest collaboration with Rohit Shetty for their next ‘Simmba’ starring Ranveer Singh. A film to be directed by Rohit Shetty and produced by him and Karan Johar, was revealed on Thursday.