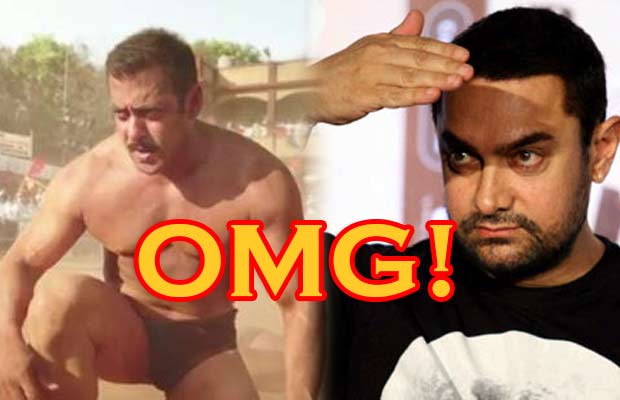 [tps_footer]This is not new that Aamir Khan and Salman Khan’s friendship turned sour after they shared a heated argument at a party last year. Time flies by and everyone thought that this cold war will die down but to everyone’s surprise, it only turned worse!

The official trailer of ‘Sultan’ has hit the net and people are going crazy over but, and so is Aamir but not in a good way.  According to Bollywood Life, Aamir was not at all pleased after watching it. He didn’t try to hide his anger and immediately called Aditya Chopra. Wondering? We’ll tell you.

The trailer of ‘Sultan’ shows a ‘dhobi-pachad’ move of wrestling; something which plays a significant role in Aamir’s ‘Dangal’ too!

Now that is some weird co-incidence. ‘Dangal’, just like ‘Sultan’ revolves around wrestling and has been shot in parts of Haryana. We already assumed there would be many similarities.  After ‘PK’, ‘Dangal’ is being projected as Aamir’s next blockbuster. But there is hush-hush if ‘Sultan’ is going to sabotage its potentials at the box office! Now that is not very pleasing indeed.

Incidentally, When a few years ago, Ali Abbas Zafar was writing the initial script of ‘Sultan’, he named it ‘Dangal’ too! Oops.

Directed by Ali Abbas Zafar, ‘Sultan’ hits the screens on Eid this year while Nitesh Tewari’s ‘Dangal’ will release during Christmas.[/tps_footer]