Aamir Khan makes and breaks his own records. Be it as box-office numbers or attending award shows. It’s a widely known fact that Aamir doesn’t attend any kind of award functions since almost 15 years. He had last attended the Oscars where his production Lagaan was nominated in the Foreign Film category.

Something happened and Aamir Khan lifted his self-imposed ban on attending award shows. Someone invited him and he couldn’t refuse this person.

It was none other than legendary veteran singer, Lata Mangeshkar. He made this exception as admires and adores her immeasurably. The ‘Nightingale of India’ being aware of this was truly happy that he came. She said, “I know he doesn’t collect awards. But he has made an exception for us. Aamir is indeed one of my favourite actors. Though we don’t meet anymore I know there is enormous mutual respect between us.” 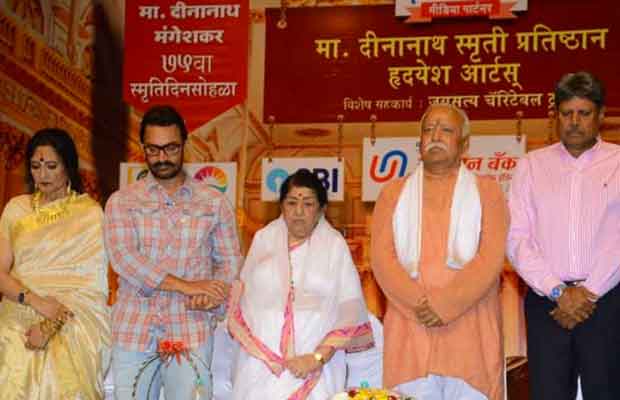 The actor was honoured with Vishesh Puraskar for his outstanding work in Dangal at the prestigious ceremony.

Once bashed for his comments on intolerance, Aamir wouldn’t have seen this day coming. It was also quite ironical as to who presented him the award. He was honoured by RSS chief Mohan Bhagwat.

Apart from Aamir, Kapil Dev was honoured for his outstanding contribution to Indian cricket and yesteryear actress Vyjayanthimala Bali, was conferred with the Master Deenanath Vishesh Puraskar for her achievements in Indian cinema.