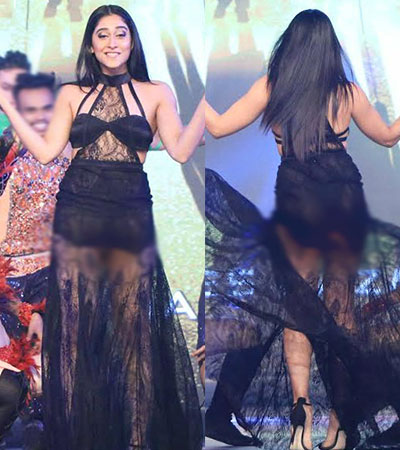 [tps_footer]‘Aankhen 2’ was announced in a grand manner. The makers of the film hosted a lavish event to announce the film. The sequel of the movie was much awaited and many speculations for the same also made their way to the masses. The film will star promising actors Amitabh Bachchan, Anil Kapoor, Arshad Warsi and Arjun Rampal.

The new addition in the film will be South actress Regina Cassandra. The talent bundle is a very famous name in the regional industry. The starlet has been facing the camera since the age of 14. Regina is credited with numerous films in Telugu, Tamil, and Kannada.

During the event of ‘Aankhen 2′, Regina was introduced by the makers. The diva also gave a power packed performance at the event. Well, a mishap took place at the same when Regina Cassandra had to face a wardrobe malfunction during her performance.

Everyone at the event was shocked and even Regina herself was equally startled. The actress has now opened up on the malfunction and has stated, “I definitely didn’t want my debut to unfold in this way. It was a terrible mishap. I got off the stage with a `Oh my God! What just happened!”

Other than this, Regina also shared how she did not even take a moment to think about being a part of the sequel and immediately nodded a yes.

‘Aankhen 2’ is assumed to be more intriguing than its prequel. The film will go on floors in 2017.