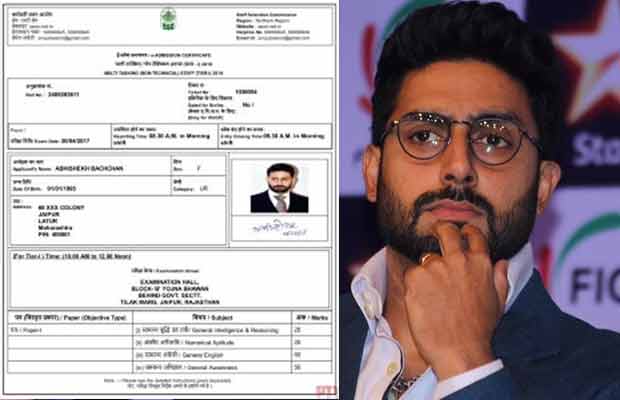 Megastar Amitabh Bachchan’s son and Bollywood actor Abhishek Bachchan has always been teased and made fun of his dipping career graph. The actor has been able to give out very few hits and has always been slammed for his acting skills. However, his struggle and efforts that he has put in for 15 years have gone unseen. Despite proving his mettle in acting, Abhishek Bachchan is trolled on social media over his flop films.

But does that mean that he needs to change his profession and apply for a government job? Something like that has happened! In a recent prank, an admit card with Abhishek’s name and picture appeared on the official website of the Staff Selection Commission (SSC), which apparently meant that junior Bachchan took a multi-tasking staff examination.

The SSC MTS exam was conducted in Jaipur on April 30 and we wonder if the actor has really appeared for the test. Of course not! Reportedly, while the SSC is yet to issue a clarification on this matter, it is said to be a prank played by an unidentified person.

We think junior Bachchan, being a sport that he is, might be having a LOL moment after reading this.

On the work front, Abhishek Bachchan was last seen on Housefull 3. Also, Aishwarya Rai Bachchan and Abhishek Bachchan are reportedly planning to come together for Anurag Kashyap’s next venture Gulab Jamun. As per reports, the couple has liked the script but is yet to give the final nod. Nothing much about the film has been revealed but it is said to be a rom-com, which will be directed and produced by Anurag Kashyap.