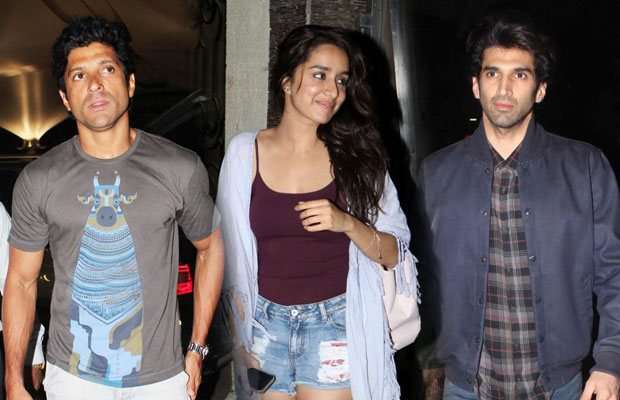 Reportedly, Farhan Akhtar and Aditya Roy Kapur had a fight over Shraddha Kapoor at a party. Read to know what Shraddha did next.

Bollywood actress Shraddha Kapoor’s love life has been in the limelight ever since the release of Aashiqui 2. The actress was allegedly dating her co-star Aditya Roy Kapur. However, the two parted ways last year, reasons known to them. Post her break-up with Aditya, Shraddha Kapoor is being linked up to her Rock Star 2 co-star Farhan Akhtar.

In fact, stories were even doing the rounds that Shraddha had packed her bags and moved in with her rumoured beau, Farhan Akhtar. But she was dragged out from his home by father Shakti Kapoor. However, Shraddha Kapoor rubbished the reports and slammed gossip mongers for going “overboard.”

As per Deccan Chronicle, the proximity between rumoured ex-flames Aditya and Shraddha has irked Farhan Akhtar, who was also present at the party.

The report quotes a source as saying, “Farhan was pretty upset with Aditya and things took a wrong turn from there. As soon as Shraddha got a wind of it, she jumped in to control the damage. In fact, she is at Farhan’s residence sorting out the issue as we speak.”

In fact, Shraddha Kapoor also visited Farhan Akhtar’s residence last night. The actress was spotted moving out of Farhan’s residence and seems, she went there to sort out things and calm down the matter. Does this mean that Shraddha and Farhan are dating each other?