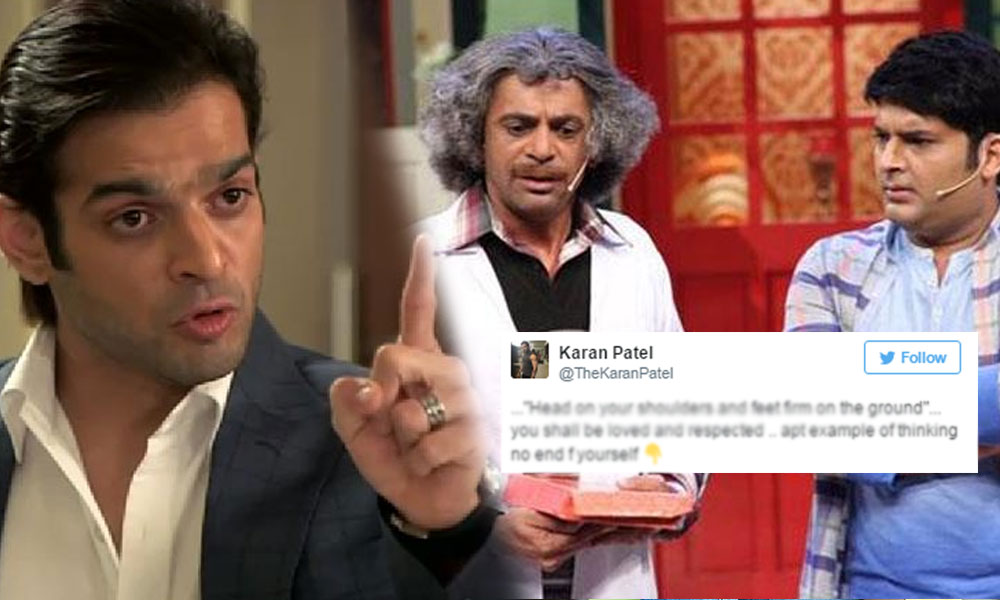 Karan Patel, who has never worked with Kapil Sharma, has taken a serious dig at the comedian over his fight with Sunil Grover.

We all are aware of Sunil Grover and Kapil Sharma’s fight that has become a hot topic of the telly world. Their fight has grabbed all the attention ever since Sunil Grover has quit the show. The audiences, as well as stars from the industry, are upset about their fight but it seems, things are not sorting out so easily. Kapil Sharma tried apologizing but Sunil Grover in his clear words has said that he is not returning back to the show.

Amid everything, Karan Patel has shared his thoughts over the issue. Well, Karan and Kapil don’t have history and neither their line of work is same. The only common thing they share is being from the same industry.

Yeh Hai Mohabbatein star Karan Patel took to twitter and tweeted, “Head on your shoulders and feet firm on the ground”… you shall be loved and respected…apt example of thinking no end f yourself.”

…”Head on your shoulders and feet firm on the ground”… you shall be loved and respected .. apt example of thinking no end f yourself ? pic.twitter.com/ww9dSMAPbg

Well, we wonder how Kapil Sharma will react to this. However, Sunil Grover fans will agree to this tweet of Karan Patel. What do you have to say about Karan Patel’s tweet? Do you agree that success has hit Kapil’s head?

Meanwhile, Kapil Sharma has maintained silence on the issue and has been reportedly given one month time from the Sony TV channel to retain the TRP of the show. The comedian star has got one-month ultimatum to solve his issue with Sunil Grover or his whopping Rs 110 crore deal with the channel will be scrapped.