Adnan Sami has shared a video of Saudi royals dancing with American President Donald Trump to question the legitimacy of Muslim clerics who target musicians with fatwas.

Singer Adnan Sami has stirred a debate on Twitter after throwing a question on why people think music is haram (forbidden) in Islam. He posted a photo of US President Donald Trump, who was in Riyadh, Saudi Arabia, on Sunday, at the start of a nine-day tour of the Middle East and Europe.

In the video, Trump is seeing dancing with Saudi men in an all-male musical ceremony. It is a traditional sword dance, and along with the video, the singer mocking the clerics for being hypocritical.

“Dear Muslim Clerics, U all claim music is haram in Islam? This is Saudi Arabia. This is song n dance by its Royalty! Whr r ur fatwas now?!”

Dear Muslim Clerics, U all claim music is haram in Islam? This is Saudi Arabia. This is song n dance by its Royalty! Whr r ur fatwas now?!?? https://t.co/sRUyba9qEZ 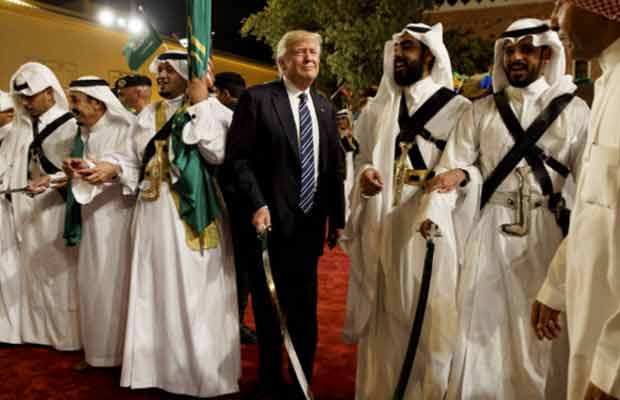 President Donald Trump holds a sword and sways with traditional dancers during a welcome ceremony at Murabba Palace, Saturday, May 20, 2017 in Riyadh.

Recently, as many as 46 Muslim clerics in Assam issued a fatwa against Nahid Afrin. Nahid is a 16-year-old singer, asking her to refrain from performing in public or be ready to face consequences.

Afrin, who hails from Biswanath district of Assam. She had made her Bollywood singing debut for actress Sonakshi Sinha in her 2016 release Akira.

The fatwa created an outrage with national news channels taking notice and singers spoke in favour of the teenager. And now Adnan Sami too has spoken out against clerics who target musicians.

Adnan had revealed earlier that he is often targeted by Pakistani social media users, especially after he received Indian citizenship. These posters allege that he is not Muslim enough anymore.

”I get sarcastic comments from them saying that ‘if you have become an Indian, then change your religion, and become a swami or something like that’. If we go by their logic, then all Pakistanis who live in America should become Christians. Or those who live in England should become Protestants. (followers of a Christian movement against the Roman Catholic Church),” he said to Hindustan Times.

The singer says that he has made peace with the hatred directed at him. And that he will continue to answer the online trolls.