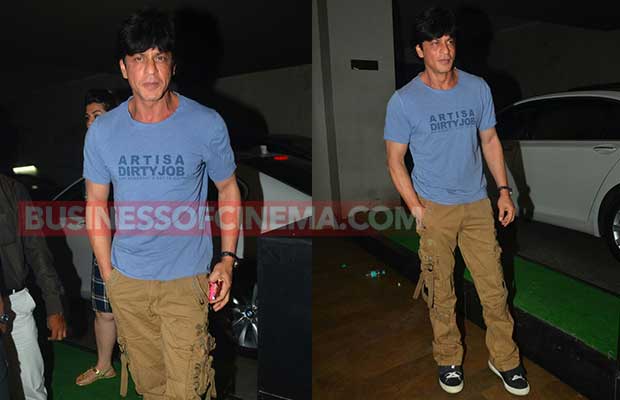 [tps_footer]Shah Rukh Khan is not only the King of the industry but the superstar is also a pro when it comes to being witty. Shah Rukh Khan who has always been an ardent supporter of creative freedom gave a message to the Censor Board in disguise. The amazing star attended the screening of the film ‘Udta Punjab’ last night.

The film ‘Udta Punjab’ which is based on the issue of drugs was lately entangled in a massive controversy. The movie was ordered around 89 cuts by the CBFC and then the makers of the film went to the High Court to fight against the same. After all the hassles, the film has finally released today with just one cut.

The ‘Udta Punjab’ row was not only a big issue for this sole film. The stated issue and tiff with the CBFC brought to light the lack of creative freedom in the country. Almost Bollywood stars supported the film and slammed the Censor Board.

SRK, who is the king of words, gained all the attention at the screening of the film thanks to his tee shirt. It seemed like; King Khan is indirectly passing on a tongue in cheek reply to the Censor Board for stalling the film ‘Udta Punjab’. SRK’s tee shirt read, “Art is a dirty job but somebody’s got to do it.”

Well, the caption is right on point seeing the present situation. The movie is directed by Abhishek Chaubey and the film has opened on a good note at the box office.[/tps_footer]