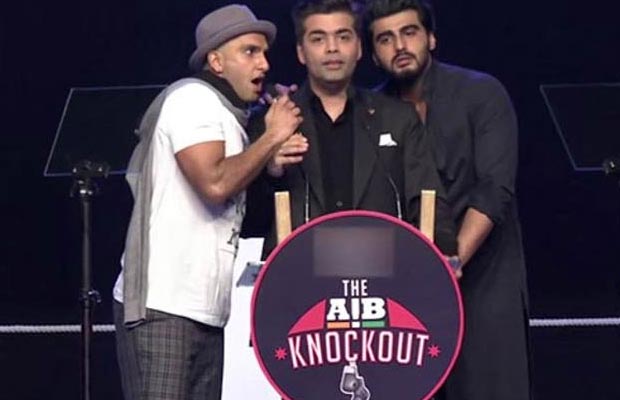 [tps_footer]Bollywood filmmaker Karan Johar has fallen in trouble again. The Mumbai Police have summoned Karan to record his statement in connection with the All India Bakchod (AIB) Knockout event that was held in December 2013.  The event was inspired by Comedy Central US Roasts where a celebrity is mocked in front of thousands of people.

AIB Knockout featured Karan Johar as the roast master, a panel of people as the roasters and Arjun Kapoor–Ranveer Singh were the celebs who got roasted. AIB Knockout was held in Worli and the video was released a month later on AIB’s Youtube channel. After the video release, the knockout ran into a huge controversy over the featured content. Social activist Santosh Daundkar filed a complaint in the city court stating the content featured was obscene and vulgar. The police received an order from the court to register an FIR against everyone who were part of the event.

Karan Johar is in London shooting for his next directorial venture, ‘Ae Dil Hai Mushkil’. He has assured the cops to show full cooperation as soon as he returns to India. After Karan Johar, it looks like the next summon will go to Deepika Padukone, Ranveer Singh and Arjun Kapoor under the section 295 of the IPC (punishment for hurting religious sentiments).

Arjun and Ranveer were roasted in front of 4000 people. The video also garnered over 8 million views but after the case was filed against everyone AIB team decided to pull down the video. Roadies fame Raghu Ram, film critic Rajeev Masand and some comedians were part of this.[/tps_footer]