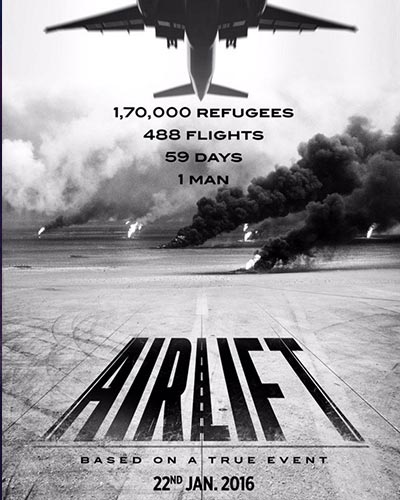 Akshay Kumar is all set to impress the audience with his intense acting skills in the film ‘Airlift’. The Khiladi of the Bollywood industry Akshay, who is a top notch in comedy movies, is also not far away when it comes to doing films with a serious tone. The actor who is often credited for his spontaneous and realistic screen presence will again get back into his thoughtful mode with the film ‘Airlift’.

The poster of the much awaited film ‘Airlift’ is finally out. The highly sensitive movie is based on true events. The film will feature the backdrop of the 1990s. The movie is not only a demanding one because it is historic but is an intriguing one as it is based on the Gulf War. The poster of the film is monochromatic and takes us back in time. The black and white tone of the poster surely conveys that the film is high on history.

The first look surely brings with it lots of curiosity. The story is also said to be one of a kind as there has hardly been any depiction of the tragic war in recent times. However, it also claims to be different in perspective. The film is surely generating loads of buzz with the impressive poster. The story will revolve around the fate and the scenario of the 1,70,000 Indians who were evacuated from Kuwait during the war.

Directed by Raja Menon the film also stars Nimrat Kaur in a lead role apart from Akshay Kumar. The film is slated to hit the screens on January 22nd, 2016.