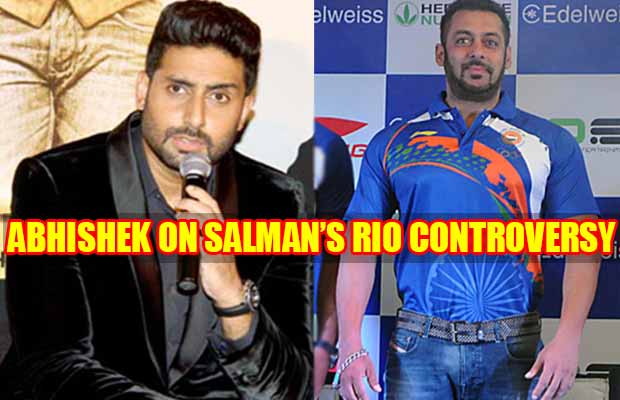 [tps_footer]It’s known to all that Bollywood actor Salman Khan has been appointed as the goodwill ambassador of the Indian team for Rio Olympics 2016. While Salman was appointed as the ambassador; many sports icon criticized the move of the Indian Olympic Association (IOA). The ‘Being Human’ star had landed up into a controversy and criticism for the same. But, B-town stars like Aishwarya Rai Bachchan, Sidharth Malhotra, Karan Johar and many others stood by the actor.

Recently, Abhishek Bachchan, who already owns one Football and one Kabaddi team, was asked to comment on Salman Khan‘s Rio Controversy. Abhishek Bachchan said, “I think if anybody wants to do some good and lend their support that’s going to help the country, there is nothing wrong with it. I work with kabaddi and football teams, and I feel very passionately about it, so honestly, I feel we need more people to support sports in our country. I grew up watching movies on sports, too, and I think it had immense influence in my life.”

“Unfortunately, we haven’t made many sports films in India. You can’t make a sports documentary; it has to be a human story within that. The triumph of the human spirit (like in ‘Bhaag Milkha Bhaag’) is a story that is always going to hit home and that’s the one thing you’re going to remember. This whole genre is waiting to be explored in our country and I would love do it,” he added.

At the launch of Cannes 2016, Aishwarya Rai Bachchan was also asked about her view on Salman appointed as the goodwill ambassador of the Indian team for Rio Olympics 2016. To which she reacted saying, “Well I just have to say that anybody who is doing good to represent the country and anyone who is working or speaking for betterment of whatever occasion be it sport, be it art or be it music, I think that’s wonderful and that what’s need to be done.”