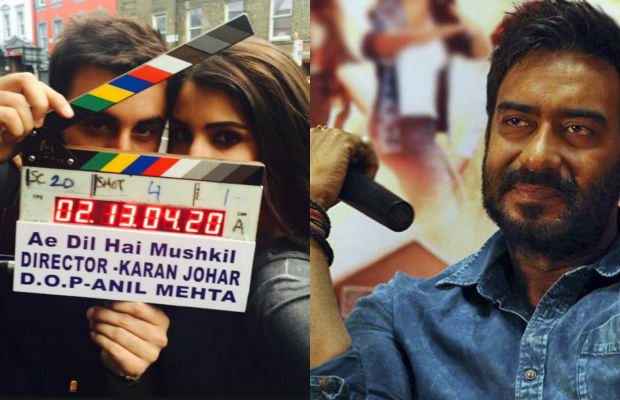 [tps_footer]The trailer of Ajay Devgn starrer Shivaay looks spine-chilling and enthralling. The stunts, visual effects, and background music used in it give goosebumps. Well, seems like Shivaay is going to be a quite an exceptional and thrilling film.

Well, what is amazing is Ajay’s film is clashing with Karan Johar’s multi-starrer Ae Dil Hai Mushkil. After Rustom-Mohenjo Daro, viewers will witness this yet another huge clash. Ajay and Karan are good friends; whereas Ajay’s wife Kajol and Karan and best buddies. So assumptions were made that at least one of them will take a step aside and push the release date. Well, turns out none of them are in a mood to change the date.

Recently, the Golmaal actor was asked about Shivaay’s clash with ADHM where he answered that he is looking forward to the clash and doesn’t need to prepare for anything. According to reports, he further added that he doesn’t waste his time thinking about someone else’s film.

Ajay also stated that he only wants to concentrate on his own film as it’s the product that speaks. He doesn’t want to break his concentration hence, he is concerned only about what he is making. Well, looks like Ajay is quite confident about his film. The Ishq actor has no worries about any box office competition and wants to give 100 percent to his own work.

Well, audiences’  went berserk over such a brilliant trailer and the way it is made. The trailer is so good that it doesn’t give us a hint of what the story is about. On the other hand, Karan hasn’t released the trailer of his film yet. So, we all have to wait for few more days to see what will Karan serve his viewers.

Shivaay marks the debut of Sayyeshaa Saigal, grandniece of actors Saira Banu and Dilip Kumar. The film also stars Erika Kaar in a vital role. Mithoon has composed the music of the film. Ajay himself directed the film.

Both, Shivaay and ADHM will hit the screens on October, 28.