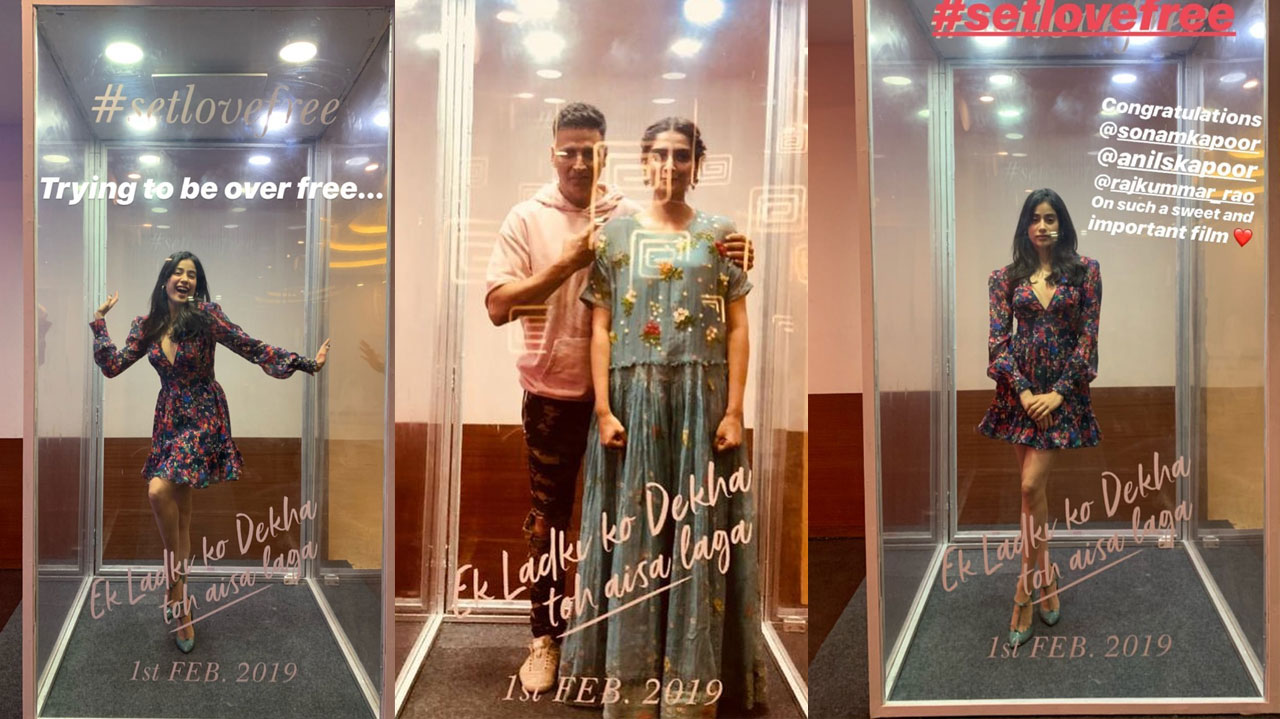 Actor Akshay Kumar and newbie Janhvi Kapoor came forward to support the film when they attended the special screening of Ek Ladki Ko Dekha Toh Aisa Laga. Both the actors are seen confined into the glass box which indicates their support towards the bold subject of the film.

Akshay Kumar along with Sonam Kapoor clicked a picture in the glass box which is a unique part of the film promotion throughout, he shared the picture on his official Instagram account where he wrote, “Still thinking about this beautiful film‪, #EkLadkiKoDekhaTohAisaLaga‬ – hats off to this woman! @sonamkapoor take a bow for making this film, deals with an important subject so wonderfully”.

Sonam Kapoor’s sister Janhvi Kapoor also seen supporting the film at the special screening where she also clicked a picture inside the glass box and shared the same as an Instagram story.

Shelly Chopra Dhar’s directorial ‘Ek Ladki Ko Dekha Toh Aisa Laga’ has been making the right noise ever since the film was announced. The new trailer showcases Sonam Kapoor’s struggle and fights against her family for her love.

The film has an ensemble cast of Anil Kapoor, Sonam Kapoor, Rajkummar Rao & Juhi Chawla. The story of Ek Ladki Ko Dekha Toh Aisa Laga will be instrumental in pushing the queer conversation forward in India. Representation of the LGBTQ community on celluloid has been a tedious one and with Ek Ladki Ko Dekha Toh Aisa Laga it will be a great concept and lesson to be shared with all the parents out there.

Fox Star Studio presents ‘Ek Ladki Ko Dekha Toh Aisa Laga’ produced by Vidhu Vinod Chopra and is directed by Shelly Chopra Dhar which also mark as her debut film is all set to release today. Having the most unique story, there’s a lot of buzz around the film which will pull all the audience to the theatre.