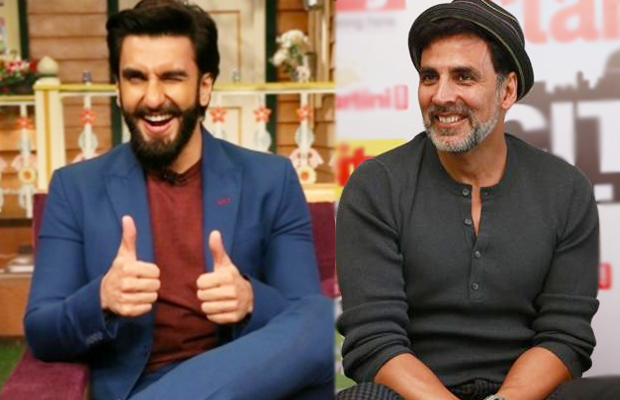 A few weeks ago, Ranveer Singh accompanied Akshay Kumar to attend the Akshay Kumar Kudo tournament in Surat, Gujarat. While in Surat, Ranveer lost one of his favourite sunglasses — which he had bought from Paris, France — owing to a melee.

A source says, “It was one of Ranveer’s most-loved possessions. Although it has been few weeks since the incident, Akshay didn’t forget that. In fact, he went out of the way to get Ranveer a similar pair of sunglasses of the same brand from Paris.” The source adds that Akshay asked one of his friends who was travelling to Paris to find a similar pair. “Although the same pair [of sunglasses] couldn’t be found, Akshay got him a similar looking piece and had it sent to Ranveer earlier this week,” says the source.

Ranveer was quite surprised by the gesture, as he wasn’t expecting Akshay Kumar to “go out of his way” to get the sunglasses. “It’s a touching gesture from Akshay, and Ranveer has thanked him personally for it. Akshay was clear that he did it, because Ranveer had travelled to Surat on his invitation. The Rustom actor also felt bad that he lost his sunglasses at the event,” adds the insider.

Ranveer has been open about how he has always been a big fan of Akshay’s. He apparently still has an autograph Akshay Kumar had signed when a young Ranveer met him first on the sets of Keemat (1998). Despite repeated attempts, Ranveer and Akshay Kumar couldn’t be reached for a comment.