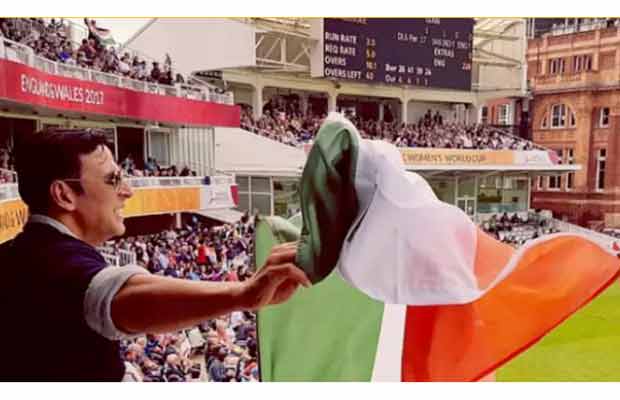 Akshay Kumar had held the Indian flag upside down at the final of Women’s Cricket World Cup.

The Bollywood actor Akshay Kumar has proven to be a true patriot several times. He has come out supporting several projects for the welfare of the people of our country. In fact, he was the one who launched the ‘Bharat Ke Veer’ app, where people can donate to the families of soldiers of Indian Armed Force.

But unfortunately, the actor a few days back did something which violated the model code of conduct. Khiladi Kumar was at the finals of Women’s Cricket World Cup and was cheering the ‘Women in Blue’. While doing so he was waving the Indian Flag. But by mistake, he held the flag upside down.

The actor got clicked holding the tricolour in the wrong way and the photo soon went viral on the social media. People were agitated at the actor’s mistake and criticised him a lot for doing so.

He soon apologised for his mistake and tweeted, “Extending my sincerest apology for violating the code of conduct for the tricolour. Didn’t mean to offend anyone, the picture has been removed.”

Extending my sincerest apology for violating the code of conduct for the tricolor.Didn’t mean to offend anyone,the picture has been removed

He said, ”I was unfurling the flag at that time and it was upside down. I was trying to steady it and hold it right but someone from behind clicked the photo. I didn’t even realise. If you watch it on television, you will see I am holding it right. Still, if I have hurt someone’s sentiments, I apologise to them.”

The actor is currently busy in promoting his film ‘Toilet: Ek Prem Katha’. The film also stars Bhumi Pednekar and is slated to release on August 11, this year.