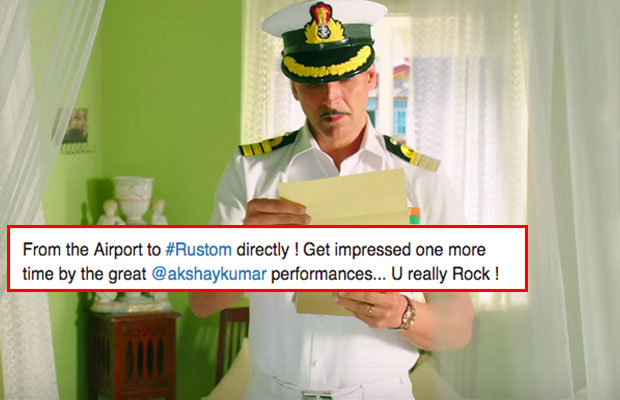 Akshay Kumar starrer suspense thriller Rustom has finally hit the silver screens. Ever since the trailer was out, people were eager to watch the film. Even the music of the film is quite good. In the film, Akki plays the role of Naval Officer Rustom Pavri. The film is based on real incidents of infidelity,crime, suspense and justice. It depicts the story of Naval Officer K.M. Nanavati. Rustom stars beautiful actress Ileana D’Cruz and Isha Gupta.

Directed by Tinu Suresh Desai, the film received different kinds of reaction by audiences’. Well, some people took to Twitter to share their opinion. Here’s what people on Twitter have to say about Rustom:

From the Airport to #Rustom directly ! Get impressed one more time by the great @akshaykumar performances… U really Rock !

Wtf movie is this!! #Rustom