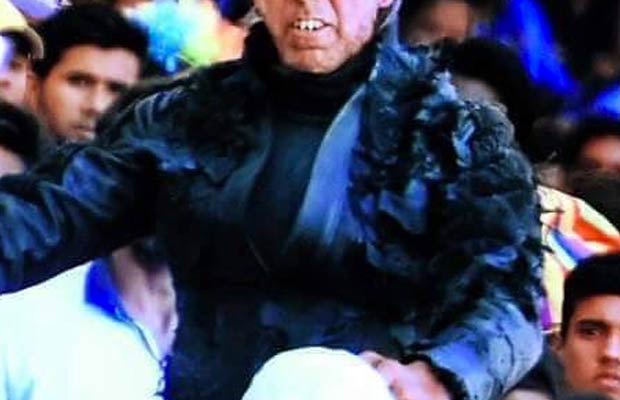 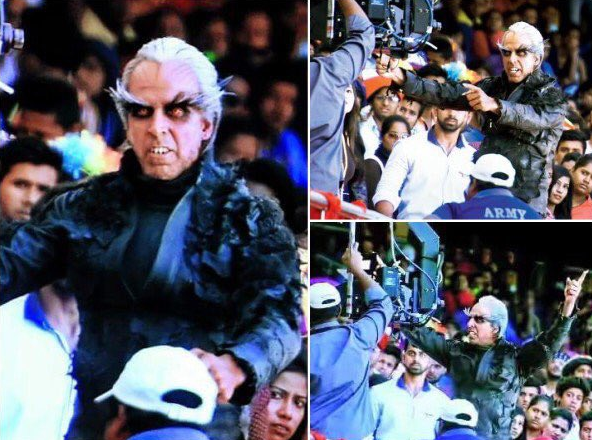 [tps_footer]Akshay Kumar has always been termed as the hit giving star. The Khiladi of the tinsel town after the success of his film ‘Airlift’ will now be seen in Rajinikanth starrer ‘2.0′. Akshay has already started shooting for the same and his look in the film is unimaginable by all means.

The leaked pictures from the sets of ‘2.0′ see Akshay in a scary image of a crow like attire. The pictures made rounds on the micro-blogging site Twitter. The image is scary as hell and sees the Airlift star in a never seen before look. With big bulgy eyes and long white lashes, the actor has donned a feather like black jacket. Must say, Akshay Kumar is looking undoubtedly dangerous in his villain role.

The action star will be seen playing the character of a villain in the film ‘2.0′ named Dr.Richard. Akshay will be playing a cruel scientist in the movie who turns into a crow after a mishap in his experiment.

The image from the sets of the film sees Akshay scaring the crowd for a sequence in the film. The film ‘2.0′ is the sequel to Rajinikanth’s film ‘Enthiran’. The two biggies Rajinikanth and Akshay will be sharing screen space for the first time.

The film ‘2.0′ is slated for a 2017 release. Additionally, Akshay Kumar is also busy in the Bollywood front with his upcoming film ‘Rustom’. The film ‘Rustom’ is speculated to be based on the Nanavati Scandal. The movie will hit the screens on August 12th, 2016.

Well, we cannot get AK’s scary look away from our minds![/tps_footer]