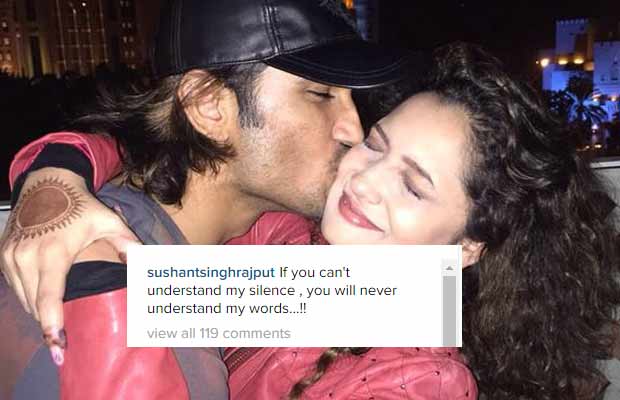 [tps_footer]One of the most strong relationships of Bollywood actors Sushant Singh Rajput and Ankita Lokhande is making reports on their break up. Each and everyone is shocked and is wondering what has happened between them.

The couple, who has been dating each other for last 6 years, have always flaunted their strong relationship. Sushant Singh Rajput and Ankita Lokhande have always been vocal about their relationship but their break up rumours have left everyone in a shock.

Though there is a buzz on their break up, Ankita Lokhande took to her twitter handle to share a heart-warming message for Sushant Singh Rajput. The actress tweeted in response to Sushant’s Instagram picture and caption.

The Pavitra Rishta actress tweeted in response to that saying, “Don’t feel alone I m always there in ur heart ,in ur life @itsSSR”

Happy holi every one ❤️❤️❤️couldn’t play holi this year because I fractured my foot .. I hope all u guys had a happy holi …?????

Don’t feel alone I m always there in ur heart ,in ur life ❤️@itsSSR

Ankita’s this message should put all the gossip to the rest but there is another twist in the tale. While their separation rumours are doing rounds and has come as a major setback for their fans, Sushant Singh Rajput shared a sad image with a caption, “If you can’t understand my silence , you will never understand my words…!!”

Well, is Sushant Singh Rajput trying to send a silent message to Ankita through this image and caption? For now, we can only hope that everything is fine between the adorable couple.

Three months ago, Sushant had announced that he would tie the knot with Ankita this year in December.