Superstar Amitabh Bachchan took to Twitter to convey his best wishes to the Oscar-winning actor Leonardo DiCaprio on the occasion of his 42nd birthday. Along with his birthday wishes, Bachchan also applauded Dicaprio for his active involvement in climate change awareness.

“Happy birthday Leonardo DiCaprio for the 11th… Colleague in GATSBY, a gentleman and a concerned ‘climate change’ actor…,” he wrote.

Baz Luhrmann’s ‘The Great Gatsby’ marked the Hollywood debut for the Bollywood megastar, Bachchan. DiCaprio played the protagonist Jay Gatsby, while 74-year-old Bachchan played the role of Meyer Wolfsheim, a gambler who serves as a father figure to DiCaprio’s character, Jay Gatsby. Even though Bachchan’s role was that in a cameo, but it was very well received by audiences as well as the critics. The Wazir star, also posted few pictures of him and DiCaprio during the time of “The Great Gatsby”. 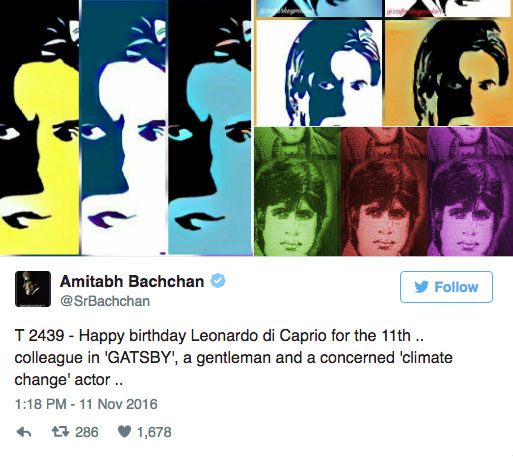 Bachchan and DiCaprio shared mutual admiration during the shoot and also during the promotion of the movie. The duo together inaugurated the Cannes Film Festival in 2013, where ‘The Great Gatsby’ was the opening film.