Legendary Actor Amitabh Bachchan has now taken to Twitter to reveal the motion poster of ‘Aiyaary’.

T 2486 – http://bit.ly/Aiyaary-MotionPoster … .. a Motion Poster of ‘Aiyaary’ a film by that renowned Maker Neeraj Pandey .. all good wishes Neeraj ji 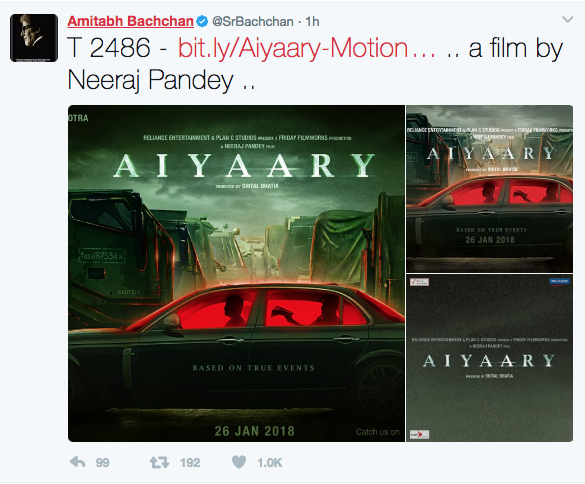 Movie is a real life story revolving around the relationship between a mentor and a protégé.

The story is set in Delhi, London, and Kashmir. Neeraj who likes to shoot in real locations will be shooting parts of it in the Valley. The film will go on floors in May 2017.

Presented by Reliance Entertainment and Plan C Studios, The film is a Friday Filmworks Productions and is produced by Shital Bhatia, The film is directed by Neeraj Pandey and is scheduled to release on 26th January 2018.

The film is touted to be a 2018 Republic Day release.