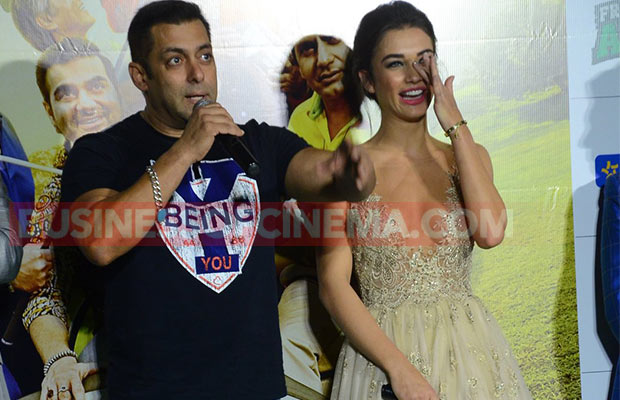 For quite some time rumors were going abuzz that actress Amy Jackson was dating Salman Khan. This began when Amy witnessed a surprise visit from Salman Khan at her look launch of 2.0 and not only this he kept on praising the foreign beauty.

But in an interview to a leading daily Amy opened up on the matter and rubbished all the rumors. She said, “I think Salman wanted to come down to show support for the film because it was a prestigious project. The fact that he showed up was amazing. He is such a great actor, a huge star. I was supposed to do Kick (2014), but couldn’t because of I. To work with Salman is a dream.”

Talking about her upcoming  venture 2.0 and Rajinikanth, she further said, “The minute you land in Chennai, you will find him [Rajinikanth] everywhere. The world rightly thinks he is a superhuman.”

She also added, “Yes, of course, he is a great actor; you can’t scale such success otherwise. But stardom aside, he is also the most humble, kind and gracious person I have known. A simple conversation with him will make you realize the value of gratitude and how it is the way forward in life. That’s a super trick for life.”

Sharing further details she signed off and said, “Performing stunts in front of him was difficult, but he isn’t the kind of person who can intimidate. He is so caring and loving,”

We wonder what’s Iulia Vantur’s take on the story!