The Demonetisation shook the country just like the declaration of an emergency would do. Every citizen is facing hassles by waiting for longer hours in the queue. Bollywood stars left no room to experience how it felt waiting under the sun for cash. Recently, the megastar Anil Kapoor tweeted about how he was happy waiting in the queue after meeting new people.

Anil Kapoor’s fans got lucky after they waited for longer hours and got an opportunity to click selfies with him.

While people have been complaining about longer lines in ATMs, the people there had an unforgettable experience when Anil Kapoor took the modesty to stand in the queue and interact with people.

Last month when Prime Minister Narendra Modi declared the ban of 500 and 1000 notes to curb black money and wipe out corruption, the nation shook, then be it a farmer or an industrialist. The cash limitation brought even the biggest of stars to the queue.

The Slumdog Millionaire actor tweeted a picture with two female fans wearing a grey shirt and a black jacket waiting for his turn at the ATM.

Anil Kapoor’s tweet quoted “ Taking selfies in an ATM line. Thanks to #Demonetisation, I get to meet you lovely people”. 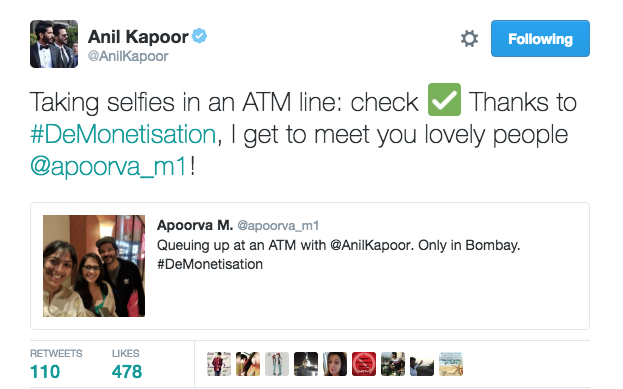 With respect to Anil Kapoor’s usual work, he will be seen in Aneez Bazmee’s next Mubarakan that also stars Arjun Kapoor, Ileana D’Cruz and Athiya shetty and will be seen next year on screens.

Coming back to demonetisation, not many actors have openly talked about the step taken by Indian government or even expressed what they feel or are going through.