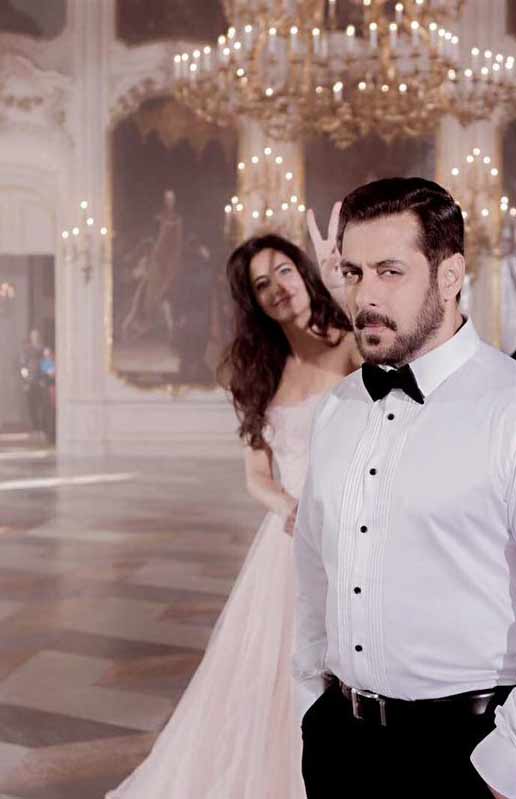 Salman Khan and Katrina Kaif are one of the most loved on-screen couples when it comes to Bollywood movies. Their fans have been missing the lovely duo for a long time. But to their delight, they have again teamed up after six years for Ali Abbas Zafar’s Tiger Zinda Hai.

There is still some time for the movie to release. But for the restless fans, there is a still from the sets of the film. A picture has been shared by the director of the film, Ali Abbas Zafar, in which Katrina can be seen photobombing Salman.

Posting the picture on his official Twitter account, he has captioned the picture as, “A very serious Katrina kaif and super focused @BeingSalmanKhan on the set of @TigerZindaHai #behind the scenes. Friday Feelings :).”

When the actor is seen trying to make the click intense by his looks, the actress has balanced the picture perfectly with her funny looks. We must say that Salman is looking a dapper in beard and that bow-tie makes him look like a perfect gentleman. On the other hand, Katrina is looking pretty as usual in that gown.

The team of the film is currently shooting in Abu Dhabi. Tiger Zinda Hai is the sequel of the 2012 release Ek Tha Tiger. The first installment was full of drama and action-packed scenes and the fans are expecting the same from the upcoming sequel.

Talking about the work fronts of the leads, Salman Khan is going to be seen on the screens in his Eid release Tubelight, whose trailer is being loved by the audience. On the other hand, Katrina Kaif is coming up with her July 14 release, Jagga Jasoos.