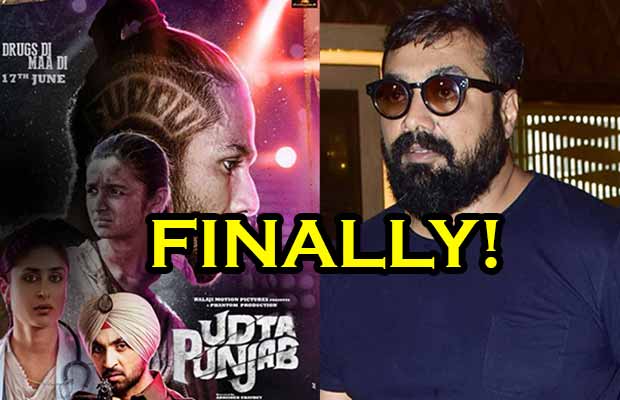 [tps_footer]Director and producer Anurag Kashyap tried his every bit and fought till last against CBFC to certify his film Udta Punjab with no cuts. After knocking the doors of High Court, the film was passed with only one cut, which was a sigh of relief for the makers of the film. While the makers of the film along with stars Shahid Kapoor and Alia Bhatt were gearing up for the release of Udta Punjab on June 17, another tragic incident left them in turmoil.

Just two days before the release of the film, Udta Punjab was leaked online, which was really saddening for the makers of the film. However, one does not need to be explained who is behind this act, as the leaked copy bears the ‘For Censor’ stamp. Soon after the leaked version of the film made its way to the Internet, neither the chairman nor the CEO of the Central Board of Film Certification (CBFC) was available for the comment.

Well, finally producer Anurag Kashyap has come out in public and has made an appeal to the people that they should watch the film in theatres and not online.

Here’s what Anurag Kashyap wrote on his facebook page, “I have never downloaded a film on torrent, i don’t know how to. yes occasionally i have seen downloaded films borrowed from friends and found a way to pay for them later, by buying them on DVD or blurray, and when i say this i also say that no one can stop your right to download a film. This time its a different fight, its a fight against censorship and if you are that audience that always downloads a film, then i won’t ask you to not do that , please do, but wait till saturday which is the day you would normally download a film. Piracy happens because of lack of access and in a world of free internet, i do not have a problem with it. My problem is that this time its a case of vested interests trying to demoralise people from fighting for their rights. So all downloaders of Udta Punjab , i urge, wait till saturday till you decide to not pay for the film, don’t download and share , curb the curiosity for two more days. Thank you for reading this.” 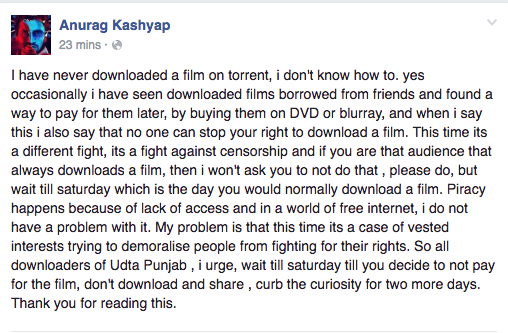