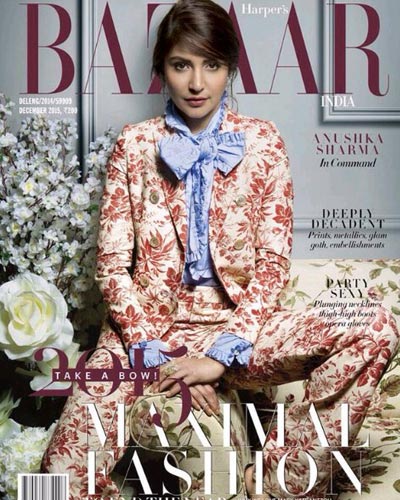 [tps_footer]Versatile actress Anushka Sharma is surely in a happy place currently. With a strong career and mind blowing love life, Anushka is on cloud nine. After giving blockbuster hits and proving her talent, Anushka Sharma is on a fashion flaunting spree. The actress is giving fashion goals to all her fans it seems. The Dil Dhadakne Do star Anushka has always been a sport when it comes to experimenting with her looks. The marvelous actress has yet again done something similar for a magazine cover.

Looking enchanting to the core, Anushka Sharma is nailing the high fashion trend on the cover of Harper Bazaar magazine. The December issue of the magazine sees Anushka dressed in a complete floral formals with a bow tie shirt. The diva is looking marvelous nonetheless in this unique attire.

The cover shouts out, ‘Anushka Sharma In Command’ and must say she looks exactly in command with those well-defined looks. With a white and a shaded back drop, Anushka’s attire is adding color to the whole scenario. The actress who is blessed with flawless skin has opted for a no make-up look. Anushka Sharma loves trying new hairdos and the star has opted for a fuss free loose bun for the cover.

Must say the starlet is no less when it comes to carrying unique designs with élan and poise. Anushka Sharma is currently crowned as the most versatile actress, after donning various genres the girl next door Anushka Sharma will now be seen in Karan Johar’s ‘Ae Dil Hai Mushkil’. The film has already initiated with its shooting schedule.