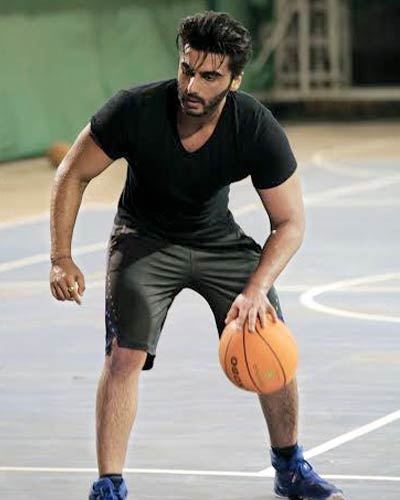 [tps_footer]We really loved Arjun Kapoor in 2 States. 2 States was adapted into a movie from Chetan Bhagat‘s novel 2 States. Now Arjun Kapoor is coming back with another Chetan Bhagat story, ‘ Half Girlfriend. Yes, Mohit Suri‘s highly anticipated – ‘Half Girlfriend‘ starring Arjun Kapoor in the lead role, as a National level Basketball player – Madhav Jha,commences shoot today. And from the first picture of the film, we can clearly say that Arjun is leaving no stone unturned to prepare for the film. Arjun‘s been training with the international basketball team from the USA to perfect the sport. Half Girlfriend is a love story and is yet another Chetan Bhagat classic.

Arjun Kapoor was last seen in Ki and Ka. His performance in the film was really appreciated. Arjun is definitely a talented actor. And he believes in giving 100% to the role he plays in the film. Sharing his happiness about Half Girlfriend, Arjun Kapoor wrote on twitter, “He shoots he scores, I love this game !! #HalfGirlfriend @ShraddhaKapoor @mohit11481 @chetan_bhagat @balajimotionpic.” He also shared a video of him playing Basketball. We are really excited to see Arjun in this new Avatar.

Meanwhile, which Arjun Kapoor film do you love? Tell us in the comments below.[/tps_footer]