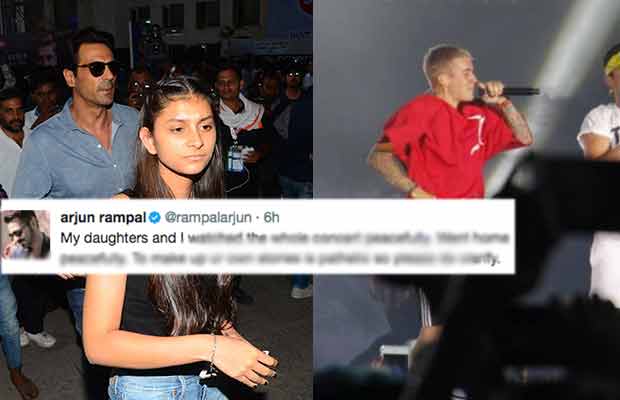 Arjun Rampal calls the news of him pushing a photographer as fake!

There were reports doing rounds in the media that the Bollywood actor, Arjun Rampal, who graced the red carpet of Justin Bieber’s concert with his two daughters, had stepped out of the venue midway the concert. It was being reported that, Arjun who was accompanied by daughters Mahikaa and Myra was speaking to media persons at the event. While he was talking to media, a few photographers tried getting closer to Mahikaa and Myra to click their pictures.

The irked father immediately halted the interview and pushed the photographers away, and walked out of the venue along with his daughters. The reports also revealed that the actor later did not step back to the concert after seeing a huge crowd falling on each other.

But now the actor himself has come out clearing all such rumours. In a series of tweets, Arjun explained how he was there throughout the concert and also that nothing had happened with his daughters or any photographer.

His tweets read, “Just read now, photographers at the Bieber concert were unruly with my daughters.Utter nonsense.They infact helped us get thru. #fakenews Jesus, what is wrong with the media? My request to you is to report the truth, that’s ur job.Not pushed any photographer.Pls prove if I have.”

He also said, “My daughters and I watched the whole concert peacefully. Went home peacefully. To make up ur own stories is pathetic so please do clarify. You have no right to make up absolutely baseless stories about people. It’s not cool. #fakenews. It’s amazing with the whole media out there.Not one image of me pushing a photographer? Strange isn’t it? Wonder why? Cause it’s not true.” 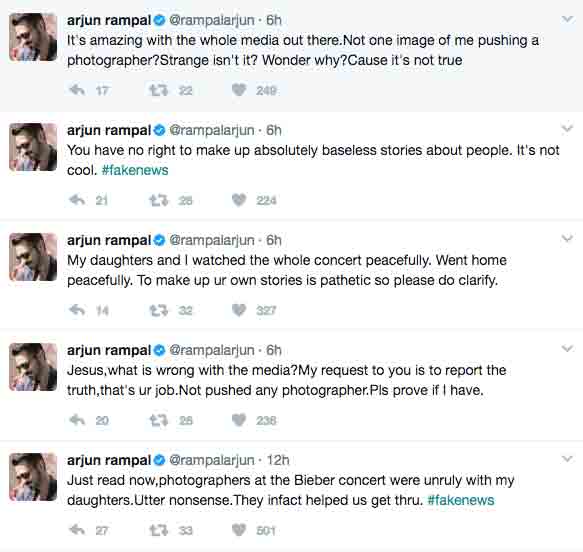 Well, not Arjun but there were still many others who were not happy with the concert. There were other Bollywood stars like Sonali Bendre and Bipasha Basu, who did not find the concert upto the mark. While the former called it a sheer waste of time, the later found the venue too crowded.

Even the fans of the pop star were left disappointed when they all got to know that the singer is just lip syncing and not singing LIVE at the concert. They felt cheated as many of them had paid as much as 76000 for a ticket of the concert!