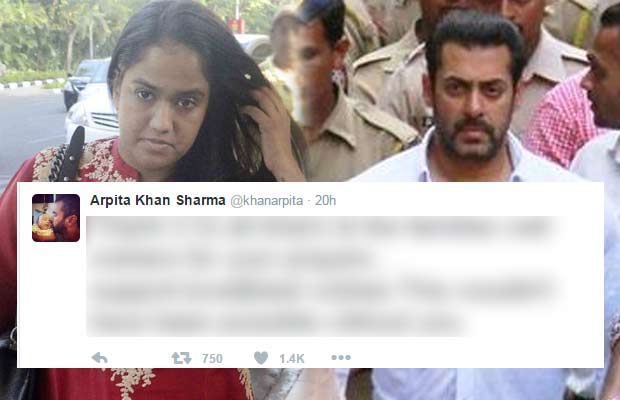 Salman Khan, who has been already rejoicing over the success of his film Sultan has a reason to celebrate further. The actor got acquitted from the double poaching case registered against him by the Rajasthan State Government in the Rajasthan High Court.

Now that the actor is free from all charges, the Khan-daan has breathed a sigh of relief.

Sister Arpita Khan is also euphoric on her brother’s acquittal and has gone all out to thank fans and well-wishers for all the support they expressed during these troubled 18 years.

Arpita posted, “Thank you god for always showering us with your grace and blessings. Today is a big day for us… Salman Khan. Thank you to all bhais and the family’s well-wishers for your prayers, support, love and best wishes. This wouldn’t have been possible without you.”

Salman was acquitted after 18 years of the blackbuck and chinkara poaching cases.

The superstar was earlier handed sentences of a one year and a five-term of two cases of poaching by a subordinate court in 2006 which he challenged along with the state government appealing before the Jodhpur bench of the Rajasthan High Court.

Today, Justice Nirmaljit Kaur allowed the star’s appeal, not only acquitting him from the charges but also dismissing the state government’s appeal for enhancing the sentences.

The case was filed after Salman shot dead a blackbuck and a chinkara at Rajasthan where he was present for the shoot of his film Hum Saath Saath Hai in 1998. He was at that time even arrested and lodged in a Jodhpur jail over the cases.

Today, Salman’s sister Alvira Agnihotri was present when the verdict was announced in favour of the superstar.

The media is awaiting a sentence from Bhai himself.