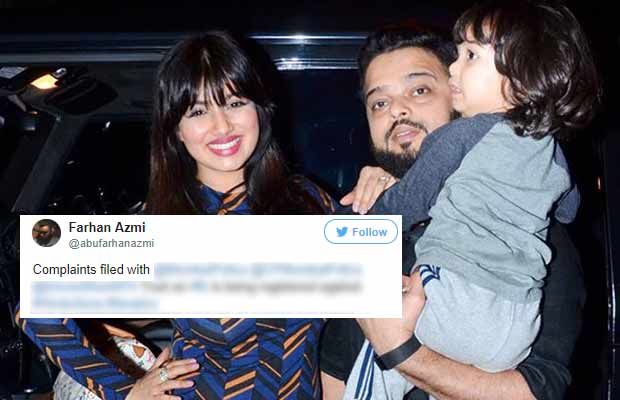 The Bollywood actress Ayesha Takia was always the non-controversial girl, doing cute films and charming her fans. But lately the actress is back into the spotlight, and this time around for her marriage to Farhan Azmi.

The Maharashtra Samajwadi Party youth president Abu Farhan Azmi filed a complaint with the Colaba Police Station when he received threats to his life.

Free Press Journal reported that the call came around Monday night saying vile things against the family and the Muslim community. “Ask your father Abu Azmi to stop shouting like an animal else he will be bumped off.”

The leader filed an FIR against a Rajasthan Hindu activist group for making the calls. The act was seen as incitement to communal disruption and is being treated as such by the police.

Farhan Azmi’s father Abu Azmi was a former member of the Rajya Sabha. He also received threats along with his son. The complaint has been lodged with the Mumbai Police and IPS Deven Bharti. He shared a picture of the FIR reports on his twitter account.

The Samajwadi Party leader Abu Azmi’s son Farhan Azmi married Ayesha Takia in 2009. The couple has a 3-year-old son named Mikail. It sure is unfortunate that her happy marriage is now being attacked.

Watch Video: Ayesha Takia SPEAKS UP On Her Comeback And Much More