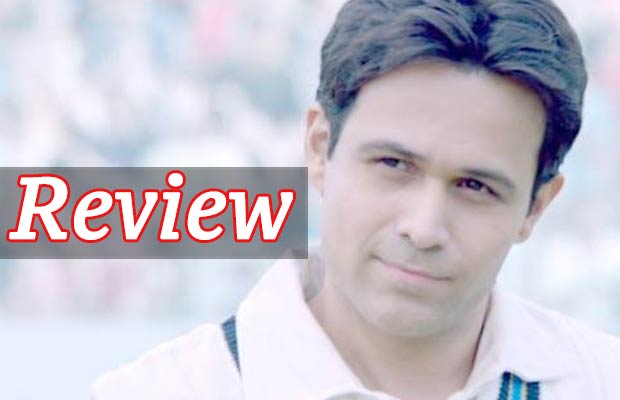 [tps_footer]A verbose disclaimer at the start tells us that while this is a film on former cricketer Mohammad Azharuddin, it is not a biopic and that the characters in the film are fictionalized along with situations etc. The first scene opens in New Delhi 2000 with a cricketer simply called Manoj participating in a sting operation that implicates the Indian test captain Azhar. Azhar gets further into a soup when disgraced South African cricketer Hansie Cronje names the Indian batsman in a match fixing case. Azhar is banned when he has completed 99 matches for India.

A cornered Azhar (Emraan Hashmi) has no choice but to lawyer up and engages the services of his friend, lawyer Reddy (Kunaal Roy Kapur). The other side is being represented by a grouchy UK-based lawyer Mira (Lara Dutta). As Reddy begins his background work, Azhar takes us through his life story. We are now subjected to a tedious segment of his birth in 1963, his grandfather (Kulbushan Kharbanda’s grating voice with a fake Hyderabadi accent is like nails on a blackboard!) drilling it into a young Azhar that she has play 100 matches for India, and his move to Mumbai. His grandfather was the most important person in Azhar’s life, we understand, and his death is devastating for the rising star.

We all know about Azhar’s stellar performance as a batsman – scoring a century on his Test debut for India – and later as captain of the Indian team. His appointment at such an early stage of his career invites resentment from his more senior teammates such as Ravish (Gautam Gulati) and Navjot (Manjot Singh). (No second names are used for any of the characters other than Azhar.)

We also see scenes of his betrothal with Naureen (Prachi Desai, overly made-up and painfully vulnerable) and his affair with Bollywood actress Sangeeta (Nargis Fakhri, all puffed up lips and terrible everything else). There are the meetings with bookie M K Sharma and allegations of deliberately sabotaging matching. Through all this Azhar stands by his innocence and is painted as a victim. Hashmi replicates Azhar’s famous awkwardness with public speaking and his body language and it helps that neither of them exudes any charisma to speak of. But, surprisingly, the performances are only a part of the problem with this safe and reverential biopic.

While Rajat Aroraa’s screenplay is a tad too safe, the dialogue blend realism and masala well, it’s Tony D’Souza’s direction that’s unimaginative. Scenes are static, go on too long and there’s an over-reliance on the background music to provide the emotional nudge absent from the narrative and characterizations.

In its attempt to bring balance, you are left being completely confused about the good guys and bad guys. One thing you have no doubt about is the miscasting of Nargis Fakhri and how none of the supporting actors look anything like their real-life counterparts especially Gautam Gulati as Ravi (Shastri) and Varun Badola as Kapil (Dev). The film ends with the lifting of the lifetime ban and with Azhar being painted as something of a ‘patriot’, and a victim. This film just left me stumped!