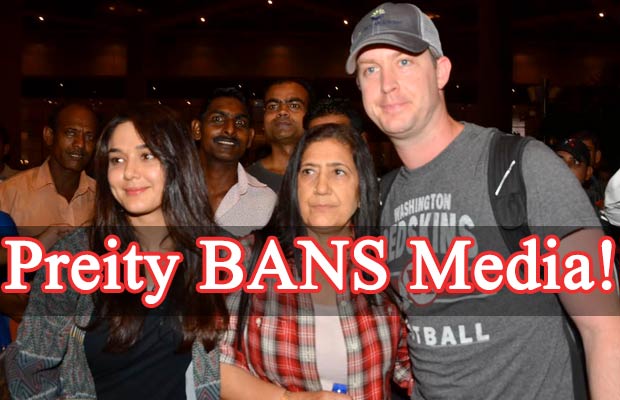 [tps_footer]Bollywood’s dimpled beauty Preity Zinta, who got married to boyfriend Gene Goodenough in a very hush-hush affair in Los Angeles, is all set to throw grand wedding reception today. Who’s who of the B-town is expected to attend the big fat wedding reception that will take place tonight in Mumbai. While all are excited to catch the glimpse of the lovely couple from their wedding reception, media is highly disappointed.

Actress Preity Zinta has strictly prohibited media and photojournalists to cover her wedding reception and the reason is best known to her. Well, it’s known to all that media plays a major role in any actor’s life and it has come as a shocking news to know that Preity Zinta does not want media at her wedding at all. Paparazzi and celebrities are having their way at large since a long time but this sudden decision of the actress has left media shocked.

A day ago, Preity Zinta had lashed out at media over IPL controversy. Kings XI Punjab co-owner Preity slammed media reports, which said that the actress abused coach Sanjay Bangar publicly after the team lost the match with one run. The actress was quick to react to the allegations and rumours made by one of the leading tabloids.

Well, is this the reason why Preity Zinta has banned media from attending her wedding reception? Time will tell better and so the results of the decision taken by the actress.