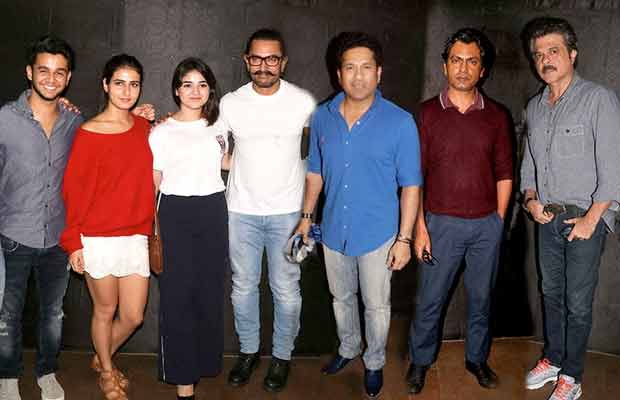 Aamir Khan had held a special preview for his upcoming film Secret Superstar last night in the city.

It was a starry affair as many prominent personalities from Bollywood and closed friends had made their presence at the screening.

Aamir Khan along with mother Zeenat Hussain and wife Kiran Rao and director Advait Chandan were also present at the screening.

The preview also witnessed a reunion as team Dangal posed for a picture-perfect moment at the screening.

Secret Superstar received a thumbs up for its heart touching content. All those present at the screening shared overwhelming response to the film.

Sachin Tendulkar said, “As always Aamir’s films are really special. In this film, there is a very strong message. Few days ago I had mentioned that dreams don’t discriminate and Secret Superstar is exactly the same. There is a small girl who is wanting to achieve her dreams and this movie will surely touch our hearts. The way everyone has performed it’s outstanding. This movie has a strong message and I am sure it’s going to be a big hit. Aamir and the entire cast all the very best. This is one more Aamir special movie but what Zaira has played is really really special, she has a long way to go.”

Javed Akhtar said, “I found it the way I was hoping it to be. Aamir Khan makes only good films out of compulsion. Aamir’s character is quite intriguing. Zaira Wasim who is playing the main character has done a really good job.”

Shabana Azmi shares, “I loved it way too much it left me as you can see with moist eyes. The subject is very good, Zaira has performed very well. Ensemble cast’ performances are really good. It is a heart touching film passing on a very strong message on girl child and for mothers.”

Rajkumar Hirani said,”I have no words. Such pure, inspiring and hugely entertaining. Aamir was fun quotient to the film who is extraordinary. You must watch the film. Zaira is just extraordinary simply extraordinary”.

Rajkummar Rao shares,”Very inspiring and very natural. Aamir sir has done a really good job he is so funny. Amazing it was the way he has portrayed himself.

Secret Superstar is based on a teenage girl named Insia, played by Zaira Wasim, who sets out to follow her dream of being a singing superstar under the confinement of anonymity.

Early screenings of the film have been garnering positive word of mouth for the Diwali release. Secret Superstar also received a standing ovation in its first cut screening from distributors and exhibitors.

Backed by content and driven by powerful actors, Secret Superstar makes for a perfect Diwali treat for the audience worldwide.