Kamaal R Khan is famous, rather infamous we should say, for his regular comments on one or the other person from the industry. The man is afraid of no one and is not bothered at all about maintaining cordial relations with any of the contemporaries or colleagues.

The man calls himself a critic, as per his Twitter account info. He does not miss out on any of the latest release and takes a dig at every actor possible. His very recent target was SS Rajamouli’s Baahubali 2. Probably his ugly tweets about the film and the director made the Baahubali actor, Rana Daggubati block him on Twitter.

KRK tweeted this news again spitting bad about the actor. With the screenshot of the notification showing the block, he wrote, “I never followed this idiot neither tweeted about him till date. Still he blocked me to prove that he is brainless.”

He did not stop there and went on dragging another Baahubali actor, Prabhas into the matter. He tweeted, “See @Me_Prabhas has got 88 thousand n @RanaDaggubati has got 2.6 million followers means these both Lukkhas are not equal to #TheBrandKRK!”

Earlier, in a series of tweets, KRK had made nasty tweets about the film saying that the film is a c***yapa. He tweeted, “Sir @ssrajamouli Sahi Chuti*a Kata Public Ka! What the fu*k is this sir? I came 2theatre 2watch film, not cartoons in the name of #Bahubali2.”

His ugly tweets continued with posts like, “Sir @ssrajamouli I don’t have doubt that ur real audience south ppl will like this Chuti*apa but Hindi audiences can’t JHELO such Chuti*apa” and “Sir @ssrajamouli I have wasted 3 hours n 3000₹ on #Bahubali2 so I just want to ask you Ki Akhir Kaya Chuti*apa Sabit Karna Chahte Thai Aap?”

He even abused SS Rajamouli as he feels that Baahubali 2 is not upto the mark. Tagging the director, he tweeted, “What a Chuti*apa, Wahiyat, crap, headache film #Bahubali2! What a direction sir @ssrajamouli! You deserve award of chuti*a director of 2017” and “Sir @ssrajamouli today you have proved with #Baahubali2 that you are the greatest Chuti*a director of the decade n our generation. Thanks” 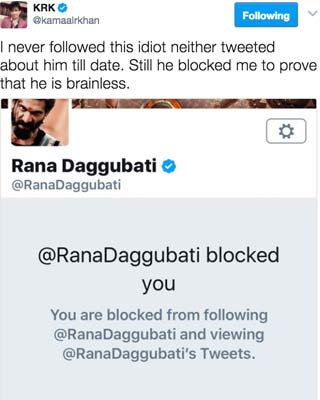 Blocked that bloke almost a year ago!! ?? https://t.co/26IySsZtqU