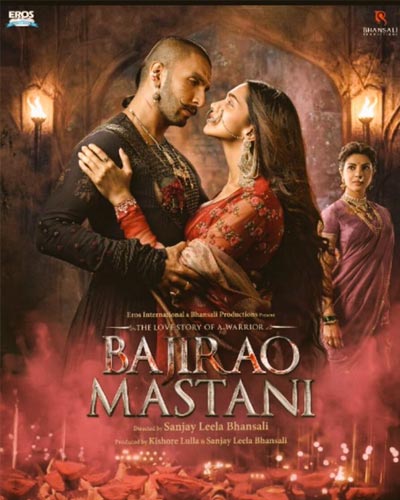 [tps_footer]‘Bajirao Mastani’ featuring Ranveer Singh, Deepika Padukone and Priyanka Chopra is yet again in news for its enchanting new poster. The film directed by Sanjay Leela Bhansali is creating waves for its concept and historic feel already. After the war struck posters and stills, the new poster of ‘Bajirao Mastani’ speaks volumes about the romance between Bajirao and Mastani played by Ranveer Singh and Deepika Padukone.

The just unveiled poster features Deepika and Ranveer embraced in a romantic gaze as Priyanka Chopra looks upon. Priyanka will be seen portraying the role of Kashibai in the film. Kashibai was the first wife of Peshwa Bajirao whereas Mastani was his second wife. The poster gives the viewer a glimpse of the historic affection of Bajirao and Mastani and the grace of Kashibai.

The poster concentrates primarily on Ranveer Singh and Deepika Padukone’s intensity. The still surely is royal to the core and makes one all the more curious about the film. With the immense perfection and detailing, Sanjay Leela Bhansali’s new poster for ‘Bajirao Mastani’ is also drenched in beautiful hues and tones. After the two songs made its way to the audience, the masses can hardly wait for the trailer of the film. ‘Bajirao Mastani’s trailer is scheduled to unveil today.

The first song Deewani Mastani received great applauds from the viewers, but the second song Pinga wasn’t able to generate much fan following. Now all the eyes are hooked on for the trailer of the film.

Directed by Sanjay Leela Bhansali, the historic film ‘Bajirao Mastani’  is all set to release on December 18th, 2015. The film is much in limelight as it will clash with Rohit Shetty’s ‘Dilwale’ starring Shah Rukh Khan, Kajol, Varun Dhawan and Kriti Sanon. Both the films will hit the screens on the same date.