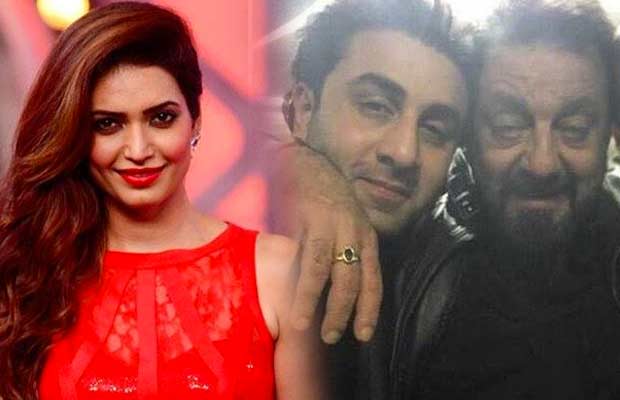 Ranbir Kapoor has been prepping for his role in the upcoming biopic based on Bollywood star Sanjay Dutt.

The film is directed by Rajkumar Hirani. Ranbir Kapoor starer film also stars Sonam Kapoor, who will reportedly be essaying the role of Tina Munim. Apparently, she was one of Dutt’s love interest. Dia Mirza is all set to play the part of Sanjay’s wife Maanayata Dutt. Manisha Koirala will be seen playing the role of Sanjay’s mother Nargis Dutt. Anushka Sharma too will be playing a cameo in the film. Paresh Rawal will be playing Sanjay Dutt’s father, late actor Sunil Dutt.

There is another celebrity who will be joining in. She is a former Bigg Boss contestant. Any guesses?

It’s none other than Karishma Tanna. Karishma has joined the cast as another love interest of Sanjay Dutt. And apparently, she has already shot for her role in Mumbai.

Ranbir Kapoor has been seen sporting a muscle look of late as part of his preparations for the biopic. The actor has gained close to 13kg in muscle to resemble Dutt’s physique, and he has also adopted the Khalnayak actor’s unique strut.

Besides the physical changes, Ranbir was also spotted wearing a wig resembling Dutt’s hairstyle from the ’90s while shooting for the Rajkumar Hirani directorial. Not only this, Ranbir planning to sport the exact same tattoos that Dutt has on various parts of his body.

Karishma Tanna made her Bollywood debut in Grand Masti in 2013. She was also seen in Tina & Lolo with Sunny Leone. Karishma had earlier participated in reality shows like Bigg Boss season 8, Jhalak Dikhhla Jaa.