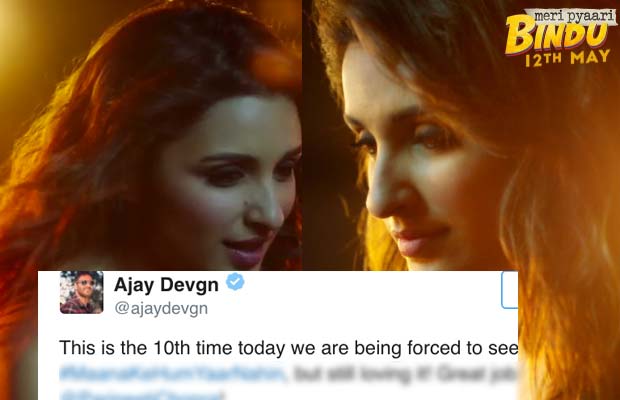 Bollywood actress Parineeti Chopra has touched our hearts with her soulful voice.

Parineeti Chopra has been applauded by her Bollywood friends and family for her debut song Maana Ke Hum Yaar Nahin. But the actress is all set to make a comeback with her next release Meri Pyaari Bindu, in May, this year.

The bubbly and cheerful actress has lent her voice for a song in her upcoming movie Meri Pyaari Bindu. The song which she has sung is so soothing and heart whelming, that you won’t be able to get over the song for days.

Alia Bhatt herself confessed that she has been continuously playing the song on the loop. Ayushmann Khurrana, after listening to the track, said that Parineeti Chopra is her favourite singer from now on.

The lyrics penned down by Kausar Munir and music given by the famous duo Sachin-Jigar, Parineeti’s voice adds to the soulful quotient of the song. The song describing a bitter-sweet relationship between two people, has left us all wondering why the actress did not decide to sing earlier.

Parineeti Chopra’s Bollywood friends have all loved her song. The funniest one was that of Ajay Devgn. He wrote, “This is the 10th time today we are being forced to see #MaanaKeHumYaarNahin, but still loving it! Great job.” The actor posted a hilarious picture in which we can see Parineeti is sitting amid the entire cast, including director Rohit Shetty, too excited to notice that others have fallen asleep.

Check Out some more tweets here:

This is the 10th time today we are being forced to see #MaanaKeHumYaarNahin, but still loving it! Great job @ParineetiChopra! pic.twitter.com/OgtXnkuMcw